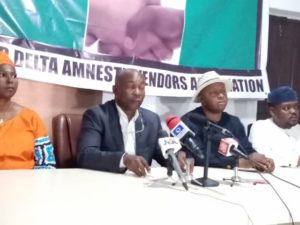 Amnesty Vendors have called on President Muhammadu Buhari to immediately terminate the appointment of Professor Charles Dokubo as the SA to the President on the Amnesty programme and to carry out a thorough investigation into all financial transactions undertaken by the Amnesty office since January 2018 till date.

The group while briefing journalist in Abuja, on monday, stressed that the call had become necessary due to the volatility of the region and the need to spread government’s presence among the states in the region.

According to Niger delta Amnesty Vendors, NDAVA, since Prof Dokubos assumption of office there has been a lot of financial impropriety including outsourcing contracts of over 500million, procurement of items without due process, non-payment of genuine contractors and stoppage of financial obligations to beneficiaries of the program among others.

While decrying the 4 billion Kaiama Amnesty vocational centre looting, the group noted that it was worrisome to mention that despite the inauguration of a six man special investigation panel, up till date the panel is yet to make its findings public and nothing has been done to bring the perpetrators to book.

Speaking on behalf of the group, Pst Samson Dabbey added that PMB should investigate the 4 billion Kaiama looting stating that through independent investigation by the group it was discovered that persons within the Amnesty office encouraged the host community to invade the centre.

He said that considering that vision for which the program was set up by Late President Yar’Adua, if the activity of the SA is not checked, it has the tendency of creating a relapse to the ugly past of militancy and economic sabotage in the region.

He called for a move to the headquarters of the Amnesty office from Abuja to any Niger Delta stating that it will afford the people a better sense of belonging.

‘‘We wish to express our appreciation to PMB for his commitment to sustainable peace and development in the Niger Delta through his support and continuation of the PAP.

‘‘However, our cry today is to the father of the Nation PMB to urgently intervene and terminate the appointment of Prof Charles Dokubo as S.A to the president on the PAP.

‘’We call on the new procurement director to resume her functions at the Amnesty office as her stopping is illegal. We demand the immediate resumption of payment of all stipends for beneficiaries. We declare a vote of no confidence on the coordinator and call on the EFCC, ICPC and the National Assembly to investigate this office’’ 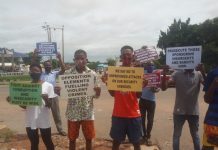