After many years of internal crisis, the Federal Government has finally intervened and returned peace to the...
Read more

President Muhammdu Buhari and the Nigerian military have been patted on the back for their concerted efforts towards ending terrorism in Nigeria. 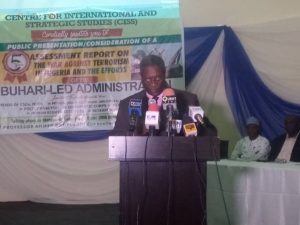 This is just as latest report has scored the military high on human rights compliance in its war against insurgency.

Professor Ahmed Danfulani, Chancellor, Centre for International and Strategic Studies (CISS) gave the verdict on Wednesday, at the presentation of five year report on the war against terrorism in Nigeria.

The report, which covered the period between 2013 and 2018, specifically hailed for ensuring professionalism in the conduct of operational issues.

It also noted a wave of accountability in the finances of the military, successful rescue of hostages without harm, among other achievements.

Danfulani, while presenting the report, saultedt the current regime led by President Buhari and the military for rebuilding the confidence of the people in standing against the atrocities of Boko Haram.

There are certain fundamentals about reports. They document what has happened, what is happening and can also predict what will happen. Reports are in a sense history being documented with objectivity. They can reveal to us what is being done right, what is in need of improvement and what can be done differently.

These are positive attributes of reports. But in the contemporary world, reports are also being weaponized.

Reports have become active ingredients in the manufacture of consent, escalation of dissent, brainwashing entire generations and in so doing perverting history.

It is not surprising to have witnessed in recent years incidents of reports being released to make terrorists appear as saints and soldiers fighting them to appear like losers.

Entities that are part of the problem can easily pretend to be the solution under this arrangement.
Nigeria is the practical instance of how reports are manipulated to distort history.

This happens because the body of reports on the country’s war on terrorism have largely been foreign often with intents that cannot be verified for sincerity hence the loss of objectivity.

The resulting subjectivity is not just an opposite of objectivity but has proven to be costly to the country and those fighting to liberate if from terrorists.

Events are recounted from the viewpoint of interests that see Nigeria as a means to an end and not a sovereign entity whose territorial integrity and aspirations must be respected.

The report being presented today therefore sets out present facts about the war on terrorism in their pristine form, untainted by any vested interest. The facts have been painstakingly collated over the said period so that there is a control to the myriad of other reports.

The implication of this is that Nigerians, indeed the world, now has a benchmark for assessing other reports. It is a matter of treating what is being presented here today as the master against which to verify other reports that can be treated as copies.

Attached is the full report as presented by the centre.

After many years of internal crisis, the Federal Government has finally intervened and returned peace to the National Youth Council of Nigeria...
Read more
News

Nigeria dropped down to 35th position in the latest FIFA Coca-Cola world rankings following a lacklustre display in November that saw them...
Read more
Foreign

After many years of internal crisis, the Federal Government has finally intervened and returned peace to the National Youth Council of Nigeria...
Read more

Operatives of the Akwa Ibom Police Command on Wednesday killed two suspected armed robbers during a shoot out with the hoodlums in...
Read more

The Bayelsa State House of Assembly has suspended the Clerk of the House, Owudugo Kozigene, for three months over allegations of gross...
Read more
- Advertisement -