The Chief of Army Staff (CAS), Lt-Gen. Tukur Buratai, on Sunday was in Sokoto State to assess ongoing projects at the 8 Division of the Nigeria Army, Giginya Barracks Sokoto. 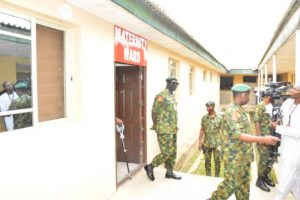 Buratai visit was in continuation of his operational tour to North West Theatre of Operations, where he assessed some ongoing projects embark by the Nigeria Army.

Among the projects inspected was the Division Medical Services and Hospital.

CAS was also briefed on the security situation in the entire 8 Division Area of Responsibility by the Acting General Officer Commanding the Division, Brig.-Gen. Aminu Bande.

After his tour of duty, Buratai was briefly hosted to a lunch by Gov. Aminu Tambuwal at the government house is Sokoto. (NAN)

The Tinubu Support Group (TSG) has called on the nation’s security agencies to step up intelligence gathering to prevent further loss of...
Read more

Niger state government says it has commenced discussion with the state Chapter of the Nigerian Legion to facilitate collaboration between the state...
Read more

The Ebonyi Police Command has said that the ban on the illegal use of siren, use of tinted glass vehicles without permit...
Read more

Operatives of the Akwa Ibom Police Command on Wednesday killed two suspected armed robbers during a shoot out with the hoodlums in...
Read more
- Advertisement -