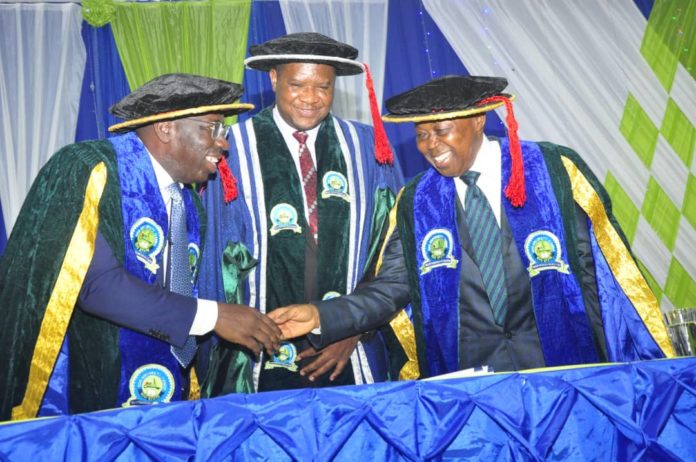 The management of Edo University, Iyamho has offered automatic employment to the five First Class graduands of the institution.

“The university council wishes to offer automatic employment to the five first class graduates as graduate assistants. They will also form the first set of beneficiaries of our TETFund grant to test run our agreement to collaborate with the university of Sunderland in post graduate studies,”.

“Today the university achieved another milestone as it graduates its first set of students, the very set that started their academic sojourn in the university in the 2015/2016 academic session”

He said that being a state owned university that was established by the fomer governor, Com. Adams Oshiomhole, the university has distinguished itself among Nigerian universities and is fast becoming a household name in Nigeria and beyond.

Also speaking the Minister of Education, Mallam Adamu Adamu, said education is the priority agenda of the federal government.

The Minister who was represented by Prof. Joseph Anikwu said education is among the priority areas in the next level agenda of government, he noted that the ministry through its agencies and commissions such as NUC and TETFund is repositioning and revitalizing public tertiary institutions thereby providing accessible qualitative education to Nigerians.

Congratulating the graduating students, said graduation ceremony in every university’s calendar is the most occasion for every student and their parents as it culminated the years of diligent and hard work, passing through days, weeks and months of stress and anxiety, self-denial and burning of the midnight oi to achieve successl.

He specifically thanked the Vice Chancellor and his management team for the giant stride they have achieved in such a short time by setting up unbelievable Faculties and programmes including Medicine and Surgery/Nursing/Medical Laboratory Science in the College of Medical Science among others.

The minister commended the Edo state government for providing the needed funds for the infrastructural development of the institution and academic excellence.

On his part, the state governor, Godwin Obaseki, said his administration prioritised education hence the huge investment in the sector.

The governor however awarded the five First Class graduates N1 million each for achieving the feat.

High point of the event was the installation of Dr. Aderemi Makanjuola as the university’s first Chancellor and award of degrees and prizes to the graduating students and N2.5 million each to the Two best graduating entrepreneurial business ideas
Attachments area

Kwara: EFCC arraigns ex-scholarship board chairperson, two others for fraud