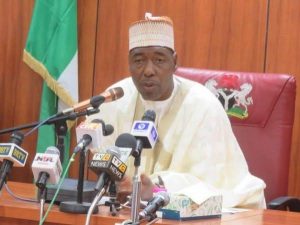 Borno Governor, Professor Babagana Umara Zulum has approved the appointment of Professor Mohammed Arab Alhaji as the new Chief Medical Director for Borno State Hospitals Management Board, while the outgoing CMD, Dr. Muhammad Aminu Ghuluze has been appointed as a Permanent Secretary to be deployed after swearing-in.

Zulum’s spokesman, Malam Isa Gusau, who announced the changes in a statement released on Monday night, also said that the Governor appointed Dr. Aliyu Mailafiya to act as Executive Director of the State Primary Healthcare Development Agency, SPHCDA. He is to takeover from Dr. Sule Mele.

The statement noted that the appointments are with immediate effect.

Governor Zulum thanked the outgoing CMD of the Hospitals Management Board and E.D SPHCDA for their tremendous contributions in Borno’s healthcare development during the years they served, the statement added.

The incoming CMD is an Honourary Consultant Paediatrician at the University of Maiduguri Teaching Hospital, a locum (backup) consultant at Borno State Specialist hospital in Maiduguri, and visiting consultant to General Sani Abacha hospital in Damaturu, Yobe State.

He was resident doctor in Ibadan and Kaduna.

As an academic, Arab has mentored many doctors, and has authored and co-authored 47 local and international academic publications.

Arab had served in more than 20 Technical Committees and as Facilitator/Investigator to several Government and Non-Governmental Organisations (NGOs)’s programmes which included the Federal Ministry of Health, Borno State Government on health projects, the World Health Organization (WHO), United Nations Children’s Fund (UNICEF), Alliance for International Medical Action (ALIMA) among others.

He has discharged numerous administrative responsibilities relating to healthcare services at the UMTH and College of medical sciences at UNIMAID.

The Professor’s research interest is Paediatric Nutrition and Infectious disease.

The Governor expects the incoming CMD to bring his wealth of knowledge and experience, especially in pediatrics, to bear in Borno’s healthcare sector for the improved well-being of both young, middle-aged and old citizens.

AfDB president, others task Nigerians in Diaspora on national development