The Nigeria Governors’ Forum (NGF) has commended the Inspector-General of Police (IGP), Mohammed Adamu, for banning the operations of the Federal Special Anti-Robbery Squad (FSARS) and a range of other Tactical Squads of the Force. 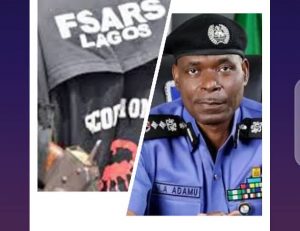 The Forum Chairman, Dr Kayode Fayemi, in a statement issued on Monday in Abuja, called for appropriate sanctions against law enforcement officers who had become lawless and irresponsible in the exercise of their duties against ordinary Nigerians.
Fayemi, who is also the Governor of Ekiti State, said that the governors received with great relief and satisfaction the decision to ban the operations of that arm of the force with immediate effect.
“We also completely agree with the directive of the IGP that no personnel of the Force is authorized to embark on patrols or tactical assignments in mufti forthwith.
“This, in our view, will significantly reduce the various infractions of the Force that the ordinary Nigerian people have been complaining about.
“We also believe this will bring an end to the menace of SARS brutality on the people they are meant to protect.
“The IGP’s instructions could not have come at a better time when majority of Nigerians are unhappy with this group of police officers who have routinely engaged in unlawful killings and torture, thereby giving the Force a bad name.
“It is helpful to recall that SARS has been cautioned for the same behaviour before only for it to go back to its old ways.
“Our young people should not be criminalized simply on account of how they look or their mode of dressing or the cars they drive, the type of phones they carry, etc. This is an assault on their fundamental human rights.
“We think this is a timely clinical response by the leadership of the Nigerian Police Force and I must commend IGP Adamu for his promptness and boldness.
Fayemi expressed the hope that the announcement would promptly be followed by action and that there would be no reversal to the unorthodox enforcement practices being complained against. (NAN)

People's DailyPoverty is a chronic affliction of human society and a common challenge faced by the whole world. China had long been...
Read more
News

Gov. Zulum And The Impeachment Hoax

By: Inuwa Bwala Babagana Umara Zulum, Professor and Governor of Borno state may not be...
Read more