Former Nigeria skipper Austin ‘Jay Jay’ Okocha has warned the country’s Olympic team in Rio they cannot become rich simply by playing for Nigeria. Money problems have marred the team’s march to the semi- finals of the Rio Olympics, just as they did two years ago when the Super Eagles also held the country to ransom before they were paid appearance bonuses also in Brazil. Okocha, who clocked 43 years on Sunday, has now told the latest edition of the Dream Team they should rather be proud they are representing Nigeria than hope to make money doing so. “You can’t get rich playing for Nigeria, you will get exposure and touch lives,” Okocha said as he marked his birthday with a visit to internally displaced people. “We have to look beyond match bonuses when playing for our country.” ‘Jay Jay’ recalled how his turning professional in Germany wiped out poverty from his family. “The decision to take the flight to Germany took away poverty from my family,” he recounted. Okocha, who won Olympic Gold in 1996 and featured at three World Cups, played for Eintracht Frankfurt (Germany), PSG (France), Fenerbache (Turkey), Bolton, Hull City (England) and in Qatar before he finally quit the game. 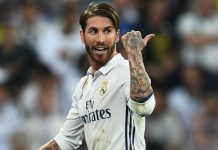