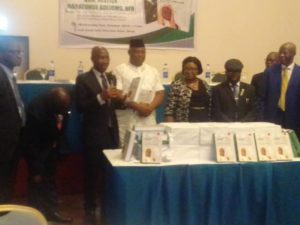 Judges in the country have been tasked to emulate the exemplary character of Justice Babatunde Adejumo, the former President of National Industrial Court, Nigeria whom guests described as an incorruptible jury who orchestrated so much transformation in the industrial court.

This was the submissions of guests who spoke at the book launch titled ‘An Uncommon Jurist: Understanding Hon. Justice B, A.Adejumo, OFR Through Cases’ held in the honour of the immediate past President of the National Industrial Court of Nigeria in Abuja.

Speaking to our correspondent, Prince. Emeka Egwuekwe, the Managing Director, Prince Interior Furniture described Justice Adejumo as a man of outstanding character and quality that never demands for kick-backs from the contractors of the National Industrial Court adding these are the qualities judges in the country should emulate.

While advising the acting President of the court he noted that the legacy of the outgoing President should not be allowed to die.

“To the incoming President of the National Industrial Court, I think he has seen the legacies that Justice Babatunde Adejumo has kept, I advice that he keeps building upon this foundation. Adejumo has a group of people that he will tell you that have made him to succeed which shows that no one is an epitome of knowledge” he said.

Mr. Emeka also had a word of advice for young people in business, urging them to be patient and honest as they go about their business adding that his encounter with Justice Adejumo proved that there are still honest people in Nigeria that desire the growth of the country.

“I started my business with N70.  I went into the furniture business with the mindset of honesty and focus. If you know that you have a big dream then you must be willing to start little. The problem with Nigerian youths is that they always want to start big and end up very small, sometimes with nothing.

“Justice Adejumo started as a shoe maker but today, he is retiring as the President of the National Industrial Court, I think everyone has a height to go in life, if you can start small”, he stated.

On her part the publisher of the book, Barrister Funmi Quadri said Justice Adejumo is an inspirational jury that inspired members of the legal practice by his works adding that he was a man of integrity, dutiful, hardworking and incorruptible.

Quadri said she was motivated to honor Justice Adejumo because he was very dutiful, very hardworking, and incorruptible and a man of integrity adding that there was no stain of corruption found in him while in office.

“Justice Adejumo was my classmate and friend.  Ordinarily, if you want to go into corruption, you will use people around you.  Corruption is not only in terms of money, it could be in terms of your appearance before a judge. So, you see this is my friend, let me say it this way, you cannot sue him. The way your case goes that is the way he will tell you.

“I supply his court books because I am a publisher of Law report.  He has never in his life asked for one kobo, he always bid for the books despite the fact that we are classmates and friends, he bids the price to the minimum that he cannot buy the books as I quoted. He is of the opinion that ‘I can’t waste government money’.  That is the evidence of a good man”, she said.

She however concluded by wishing him a happy retirement and advised him to find things to engage himself in considering that fact that he is very strong and still active. 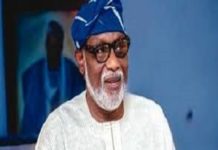 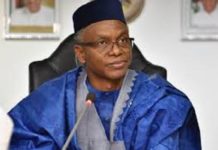