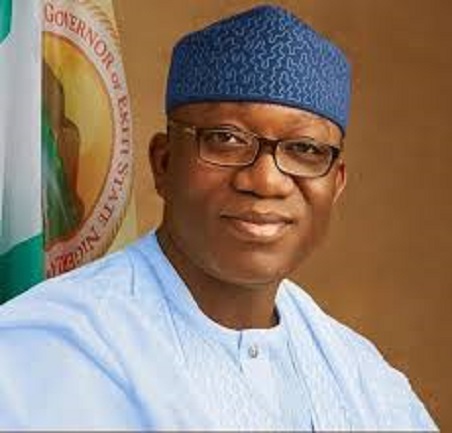 The  Chairman of the Nigeria Governors Forum (NGF) and Governor of Ekiti State, Dr Kayode Fayemi, has described the two weeks extension of the lockdown in the FCT, Lagos and Ogun States as tough, but “the right way to go”.
A statement issued in Abuja on Tuesday night by Mr Abdulrazaque Bello-Barkindo, Head, Media and Public Affairs of NGF Secretariat, quoted Fayemi stating this during his teleconference meeting with President Muhammadu Buhari.
Fayemi, according to the statement, said that Buhari’s address to the nation on Monday captured the mood of the country and showed that his administration was in touch with the plight of common man.
“The NGF Chairman also told the president that while the targeted testing strategy adopted by the country had done a lot, there was need to increase the testing number.
“The NGF Chairman added that the Governors were desirous of having some more testing facilities so as to deepen the gains already made by the Nigeria Centre for Disease Control (NCDC)”.
Fayemi however urged Buhari to instruct the relevant authorities to use the machineries of the state governments for distribution of pallaitives so that it would penetrate all nooks and crannies of the country.
He added that the palliatives would be more meaningful if they were distributed through the state governors.
Fayemi also said that states were going through rough times and would like to appeal to the president to take certain decisive decisions to ameliorate the sufferings of Nigerians.
He said that all the 36 States’ Governments were currently reviewing their budgets downwards to conform with the prevailing realities.
He thanked Buhari for the approval of the release of $150 million to augment projected FAAC shortfall in June, but added that more needed to be done to keep the states properly afloat.
Fayemi alluded to the revenues from the Liquified Natural Gas (LNG), which he said could help in assuaging some issues related to revenue shortfalls.
“Fayemi reiterated a point from the 4th NGF teleconference meeting of the Governors where they called for the suspension of all deductions by the federal government so that states can address the COVID-19 challenge from a position of economic strength.
“Fayemi also hinted the president that there was the need to streamline all multi-lateral and bilateral interventions and funding so that states are also integrated and considered because of the difficulties that they are going through.”
Fayemi commended the Presidential Task Force on COVID-19 for doing a great job, but the governors would be happier if their requests were met.
Fayemi commended the President for the manner in which he has always rescued the States, recalling presidential approvals for bailouts, budget support facility and London Paris Club refund, among others.
He urged the president to also encourage the evolution of a national strategic plan that would encompass the subnational level so that the country will find a fast and easy way out of the woods.
Fayemi, according to the statement, ended his conversation with Buhari on the plight of informal sector workers who were daily paid in the country, but not been captured in the national register and therefore exempted from the conditional cash transfer.
He said that their plight needed to be quickly addressed before Nigeria situation crumbled into the “Ecuadorian Alternative“ where the poor and vulnerable people of Ecuador flocked into the streets in violation of the stay-at-home order in the country.
COVID 19: Baptist High School Old Students Donates Safety Materials, Food Items
Fayemi was also quoted telling Buhari that since the outbreak of the pandemic, governors have been meeting on a regular basis and met four times over an initial span of 12 days.
Fayemi noted that the governors would be having their next (5th) Teleconference meeting on Wednesday to view the strategies so far put in place in their various States, apply peer learning mechanism to share experiences and collectively adopt areas of successes for the good of their citizens.
The statement also quoted the President in his response commending Fayemi for providing decent leadership at the Forum and keeping all Governors on course which he said has helped the federal government to find easy access to the subnational level.
It added that Buhari directed the NGF Chairman to formalise all the requests of the governors and forward them to him, promising that they would be promptly addressed.
CopyAMP code