Activities on the nation’s bourse closed on a downward trend on Tuesday,  with the market capitalisation dropping by N4 billion. 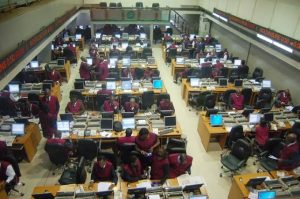 The downturn was impacted by loses recorded in large and medium capitalised stocks, amongst which are; Seplat, Red Star Express, Dangote Sugar Refinery, Oando and NPF Microfinance Bank.

Consequently, market sentiment, as measured by the market breadth closed negative with 13 gainers in relative to 15 losers.

NPF Microfinance Bank led the losers’ chart in percentage terms, losing 9.42 per cent to close at N1.25 per share.

Conversely, Ikeja Hotel dominated the gainers’ chart in percentage terms, appreciating by 9.52 per cent to close at 92k per share.

Transactions in the shares of FBN Holdings topped the activity chart with 51.44 million shares valued at N257.45 million.