The Senate on Wednesday asked its committee on the Independent National Electoral Commission to screen Professor Mahmood...
Read more 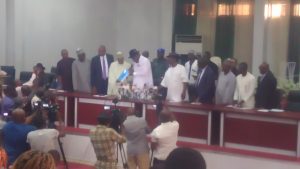 The Nigerian University Commission NUC, has formally accredited the Bayelsa Medical University BMU stating that the University is ranked as one of the best in the Country.

While presenting the letter of Accreditation to the Executive Governor Of Bayelsa, Hon Seriake Dickson in Abuja yesterday, The Executive Secretary of the commission Professor Abubakar Rasheed disclosed that he is proud to identify with the people and government of Bayelsa for achieving such laudable milestone in the area of education.

According to the Executive Secretary, Gov Dickson is a very intelligent and articulate leader that has projected education to international level, affording students of Bayelsa state the opportunity to compete favorable with their counterparts anywhere in the world.

Prof Rasheed emphasized that the NUC is pleased with the actions of Bayelsa state and governor Dickson has shown the way to build universities with a universal pattern, adding that he is a good friend of education and the universities.

He said that the system, high standard established in the African University has increased the commissions’ confidence in the bayelsa state government to manage such high educational standard.

While receiving the certificate of accreditation for the Bayelsa Medical University from NUC, Hon Henry Serike Dickson noted that the state was elated at the great work the NUC was doing in the area of education, the bayelsa government is opportune to be a part of such success story through the establishment of one of Nigerian foremost medical institutions.

While emphasizing that Education remains a cardinal pillar of his administration, Gov Dickson disclosed that upon assumption of office they met with a decaying educational system which presently has experienced a positive overhaul.

‘’We saw the direct connection of the insufficiency of education in the state, which made us declare a state of emergency in 2012. Funding education has remained our priority as we have come to understand that if we do not build schools, then we should be ready to build more cemeteries, jails and prisons.

‘‘Before we assumed office, Bayelsa state was ranked 29 in national examinations but that has changed since we assumed our educational revolution, now we are ranked 3 and 4 which is a great ranking.’’ he explained.

He added that the university will remain the best diagnostic center in the country, best medical training institution in Africa because it houses state f the art equipments, that can be compared to anywhere in the world.

‘‘It is possible to get quality education in Nigeria and we believe that this university will live up to its moto which I picked specially myself, ‘’service to God and man’’.

“Nigeria can also get quality health care services in Bayelsa state instead of going to the united states or canada” he said.

Also speaking on the sidelines was Prof Ebitimi Etebu the Vice Chancellor BMU while thanking NUC said the sighting of the medical university at the present location is due to the world class facilities that are already in place saying the University is in collaborating with both national and international institutions to harness human resources to man the university.

Etebu however added that the university will stand the test of time as an international specialized medical institution.

The Senate on Wednesday asked its committee on the Independent National Electoral Commission to screen Professor Mahmood...
Read more
Foreign

The 15 political parties participating in the Northern Senatorial District by-elections in Cross River State on December 5 have signed a peace...
Read more
Defence/Security

Troops of Operation Hadarin Daji have gunned down 82 bandits in Katsina and Zamfara States. While 67 criminals were...
Read more
News

The Presidency has expressed its opposition to a bill in the House of Representatives seeking to regulate the Ecological Fund.
Read more
- Advertisement -

The Senate on Wednesday asked its committee on the Independent National Electoral Commission to screen Professor Mahmood Yakubu as INEC Chairman for...
Read more

The Presidency has expressed its opposition to a bill in the House of Representatives seeking to regulate the Ecological Fund.
Read more

The Osun All Progressives Congress caucus in the National Assembly has announced cancellation of a lecture titled, ‘Ten Years of Uninterrupted Progressive...
Read more

President Muhammadu Buhari, on Wednesday, paid tribute to the former President of Niger Republic, Mamadou Tandja, who died on Tuesday at the...
Read more
- Advertisement -