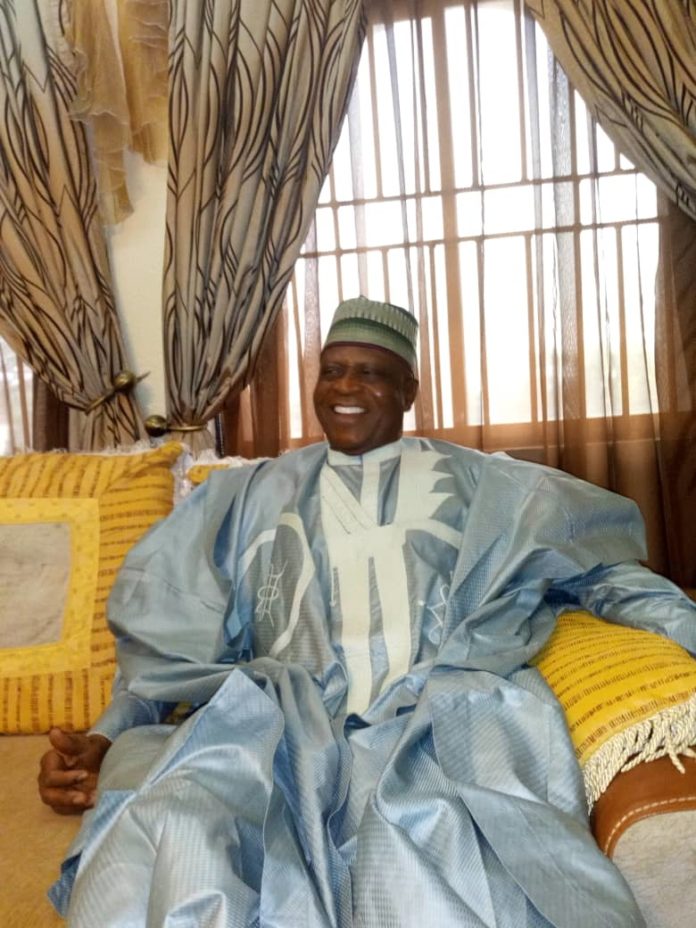 A frontline politician, who was the former National Chairman of the People’s Democratic Party (PDP) and also a one time National Secretary of the party, Alhaji Abubakar Kawu Baraje CON, speaks on Nigeria at 59. In this interview with journalists in Ilorin, the Kwara state capital,, Alhaji Baraje bares his mind on sundry national issues including the leadership style of the present administration under President Muhammadu Buhari, the rule of law, poverty and security challenges facing the nation. STEVE ONI was there.
Excerpts:

Your reaction to Nigeria at 59: To me, that we are 59 is a good thing to hear as a nation and as an individual, and as a living being if you clock 59, you have cause to say thank you God.

But as a Nigerian and as a people in Nigeria do we have cause to say thank you God?

Well, if we look at it this way, we’ll say thank you God because we are still alive and He has given us strength. He has also given us good health so we thank God for all that. But as far as development of the country is concerned, I think there is still a lot to be desired. Granted the fact that we are a republic or we are in a democratic dispensation, the question is, it is at what level socially, economically? There’s a lot desired by the electorate particularly when we came back into democracy, all hopes were high and then everybody thought that yes, this is a new beginning for Nigeria.

We started very well and as a toddler that time when we were trying to walk, we thought it won’t take a very long time when we’ll find our feet but we all can see that it has been a ding dong affair with one step forward and many steps backward.

We can not place Nigeria in any enviable position even in the realm of seeing that you are proud of a country. We can’t say we are a giant, as the so called giant of Africa

We are being thrown out even by countries very close to us in West Africa. So to me, I think our leaders just need to buckle up with the little experience that some of us have had in the leadership in this country

And I’ve always been telling you people particularly the media that I have discovered that the major problem of our country is leadership, and once we get the leadership right, all other things will follow.

I also discovered that the most obedient and the easiest kind of people to control are Nigerians because we are law abiding, we are people that are resilient when it comes to struggle because we are people that have tickness to live up. So you only need to ginger Nigerians to work. But what are we seeing today, I think the present administration you can adjudge it, that we need to look inward in order to make an impression but internally and internationally, we are not doing fine.

And to those of us who participated in 2015 in bringing up this present administration to power, the question maybe that’s why you people in the media are trying to ask me this question

I tried as much as possible to avoid the media simply because of one or two things because I know I was one of the people that saw this administration into power. And when the press were chasing me all about, I kept quiet, because you talk when you are proud to see what you have brought into being. But you feel ashamed, you are not encouraged to come forward to talk when such a being that you participated in bringing up is not making you proud, what do you have to say other than to apologise to the public and begin to give them hope.

So that is why some of us now withdraw to the backward and remain very apologetic that we participated in bringing this kind of government today into power.

We must cultivate an attitude whereby if a leader goes it is not the incoming government that will begin to say that this leader that has left is bad but just come and put in your own quota because you are doing it not for yourself, not for your family but for Nigeria as a nation. Whatever it is, leaders should put it right so that we can move forward.

Your take on Rule of Law: In terms of rule of law, what we are witnessing today is the worst so far. I thought we have gone beyond where government will be clamping down on activists and clamping down on the media. I thought we have gone beyond that, clamping down on media houses and the media people. These are actions that I thought we have surpassed 50 years ago which is now what we are witnessing. That is why I call it a ding dong affair. That is the kind of situation we have found ourselves. When you come to the rule of law, where you have the court of law issuing Orders, issuing judgments and the government refused to obey such judgments and then we are saying we are fighting corruption. If you want to fight corruption, you begin with the rule of law as a matter of fact in any democracy and the kind of democracy we are practising in Nigeria, the judiciary is the third pillar, a very strong pillar that holds the nation. And so if we disgrace or disrespect the judiciary, then how do we walk, talk less of saying you crawl or want to run ?

If the government can listen, we will ask them to hasten and put things in place in order to better the economy of the country so that the downtrodden can feel that we have a government in power.

Your advice to Government: The second area is for government to seek the opinion of people. The government should look around, get people with experience put them together, ask them to advise it on how to create convenient policies for the people

Probably, let our legislative arm create laws where the judiciary will be totally autonomous or create a budget for the judiciary so that they will not live under the fear that the executive or the legislative arm or anybody will come to harass them. So to me, when you have some of these things in place, all will be well in the land.

One is even afraid now to advise the government because you don’t know what next would happen to you and we say we are in democracy.

We also want to advise government to let people talk. I have never seen a country where you take a citizen to court because he insulted the President. Any leader who never wants to be insulted, will not even come to such position.

Any leader in such position should expect to be like a dustbin and it is when you allow people to talk, you can pick the one that is more desirable.

So I urge the government to relax the clamping down like the way the musician would say. relax the news around so that our ‘mumu’ will not go beyond this level. I also want to advise the public that they should remain undaunted. They should remain relentless because maybe one day, someone or somebody somewhere will listen and then there will be reasoning.