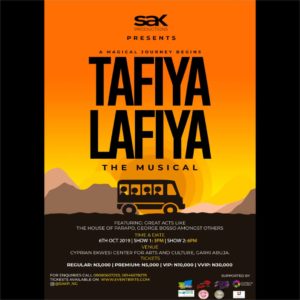 Theatre and entertainment has been described as a tool for cultural transformation as SAK production is set to presents Tafiya Lafiya, a musical drama with thirteen original songs blended in comedy and drama in Abuja on October 6.

According to a statement by the playwright and director, Samuel Adedoyin Kugbiyi, the musical drama performance is part of his efforts to use entertainment to cause a reform and cultural transformation in Nigeria.

Kugbiyi believes that theatre and entertainment can cause reformation in the minds and hearts of anybody leading to a cultural transformation adding that the present cultural practice today in Nigeria is as a result of the entertainment content the country has consumed.

According to him, Tafiya Lafiya is a musical stage production of thirteen original songs blended in comedy and drama that highlight issues of parenting and love adding that it has an original cast of 18 actors, three backups and five accompanying instrumentalists.

The playwright and director noted that the performance will feature two lead characters, a male and female who desires of becoming famous in their chosen careers but were faced by various obstacles ranging from parental challenges to lack of job satisfaction.

One of the characters despite the educational qualifications ended ended in a slave camp but a twist of hope came through saying an unpleasant journey brought a pleasant character.

Kugbiyi draws his inspiration from the Tyler Perry, who through pain have become a beacon of hope for many around the world while he admires the likes Eddy Murphy, Jim Carrey and Kevin Hart.

He revealed that he has loved acting and singing since primary school days but never comfortable doing just one – saying he likes his plays to be a blend of music and drama.

The playwright says “I never felt too comfortable doing just one or the other. I eventually found the perfect balance in Musicals- a combination of music and drama in such an intricate blend. “Musicals afford me the means to express myself by writing, acting, directing and singing.
I enjoy writing songs and I’ve thoroughly enjoyed the process of writing the songs and the script, producing and directing the production” he concluded. 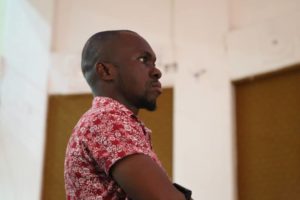