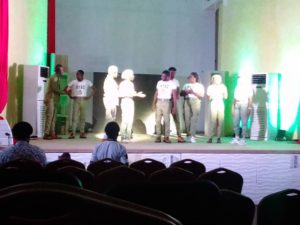 A former Minister of State for Culture, Tourism and National Orientation, Aliyu Idi Honle has tasked youths to shun irregular migration and resort to work hard in the country adding that they can make it a million times in Nigeria.

Hondle, noted this when he spoke as a guest during the stage presentation of Tafiya Lafiya, the musical by SAK Productionin Abuja over the weekend.

According to him, the stage play has significant message for Nigerians youths and it is important for government to step in and support theatre performances because it helps to correct social ills in the country especially trafficking and irregular migration.

“Tafiya Lafiya has a very important message particularly to young people, who think that life doesn’t begin until you travel abroad.

“They risk their lives travelling through the desert into the Mediterranean sea crossing over to Europe leading to incidents of people dying, maimed, sold into slavery and harvest human organs as well as all manner of torture, rape, abduction and forced labour. We have seen all that and it is what this performance portrays”.

The former minister of state advised the government and its agencies especially the National Orientation Agency, NOA, to adopt the key messages in the stage play of Tafiya Lafiya, the musical to change the minds of youths on irregular immigration.

“I want to urge government particularly, the Ministry of Culture and Tourism and its agencies, National Theatre and the National Orientation Agency because they have something to pick from here.

“I want government to support this. If people like these are supported, this message will go far and wide. This is something to broadcast to Nigerians to know what will happen to them if they embark on this dangerous travels”

Hondle who was also the former Minister of state for Foreign Affairs, advised Nigerian youth from embarking on irregular migration insisting that there are greater opportunities in the country.

“There is hope here, people should just buckle up and know what they are very good at and do it very well. Abroad you don’t have a spare time or lazing time, you work 24 hours, 7 days a week. If you can work like that abroad, why not do it here and make it more? There are opportunities in Nigeria and we are great people”. he said.

He however advised the organizers and the theatre troupe to properly organize and package Tafiya Lafiya to attract national recognition adding that the message of play should reach more Nigerians through a live broadcast on national television.