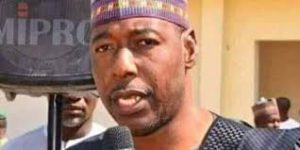 Highlights of the contract allocations indicated that, about N8.076 billion to EEC, while N2.8 billion to Obtuse Tech Engineering Construction Company limited,

The road projects cited within Maiduguri metropolis are to be executed within a period of one year (12 months), as it will also have two bridges and drainage contained in the specifications and guidelines approved in the contracts.

Our correspondent reports that, with these projects, the ministry has almost exhausted half of its 2022 budget in the first quarter of the year, as about N22.9 billion was allocated to it.

The ceremony which was brief took place at Post Office Round about, in the center of the city.

The Governor said, ongoing construction of roads, drainage networks with fly over bridges were inline with his electioneering campaign promises made to the people of the state.

He enjoined the contractors to ensure good job as government will not compromise poor execution of projects.

Zulum also called on the management and staff of the Ministry of works and site engineers to monitor the projects work from commencement to end.

“I am glad to unveil the dualization and construction of about N11 billion roads and drainage within Maiduguri metropolis.

“The massive ongoing construction of roads, drainage networks with fly over bridges witnessed under the present administration were inline with my electioneering campaign promises i made to the people of the state.

“I therefore enjoine the contractors to ensure good job as government will not compromise poor execution of projects.” Zulum stated.

Conducting the governor round the project sites within the metropolis, the Permanent Secretary who oversees the ministry following the redeployment of the former Commissioner, Architect Yerima Saleh to Ministry of Environment said, “the first slot of the road projects is the 5.324km combined dualization with drainages and two bridges at Ahmadu Bello Way to link Bama road, Shehu Sanda Kura road at the cemetery junction linking the Elkanemi Roundabout through to Elkanemi Bridge, down to Lagos junction and Bolori Roundabout to Mogoram Junction down to Lafiya road which was awarded to EEC at the cost of about N8.076 billion.

“The second slot, is the 8.2km road construction, consists of Baga road market- Jajeri – Umarari- Bulabulin with another one linking Texaco- Churchkime – Abdu One road at the total cost of about N2.8 billion which was awarded to Obtuse Tech Engineering Company limited.”

Lawan recall that, in September last year 2021, a tender/bid documents in respect to these projects were advertised in some national dailies, after which, companies were invited for the bid, adding that, EEC and Obtuse Tech Engineering Company won and considered to execute the projects.

“We commend the foresight of governor Babagana Zulum for approving these projects as these roads are very vital to the people of the state.

“I want to assure the government and the people.of the state that our Engineers from the Ministry will always be on sites to offer professional advice(s) as the need be to ensure good job.” The Permanent Secretary stated.

Responding, the Project Engineer of EEC, Mr. Li Chao Qi and Managing Director, Obtuse Tech Engineering and Construction Company, Engineer Umar Sheriff Lawan  thanked Borno State Government for considering worthy to execute the road projects and assured that they will do everything possible to meet specifications and complete the work within the time frame. End

By Stephen Olufemi Oni The Chairman of the Islamic Orphanage Foundation (IOF), Alhaji Seifullahi Alege, has called upon the federal government in conjunction with...
Read more