Gov. Godwin Obaseki of Edo on Thursday emerged the candidate of the Peoples Democratic Party (PDP) and would fly the party’s flag in the Sept. 19 governorship election. 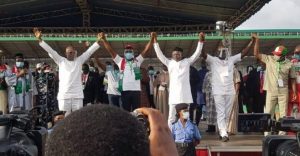 Obaseki emerged candidate after two other aspirants, Mr Omeregie Ogbeide-Ihama representing the Oredo Federal Constituency in the House of Representatives and Mr Ken Imasuangbon finally stepped down from the race.
The News Agency of Nigeria (NAN) reports that one of the aspirants, Mr Gideon Ikhine, had on Monday stepped down for the governor.
Gov. Bala Mohammed of Bauchi State, who was the Chairman of the Governorship Primary Committee, said that voting still took place in line with the party’s constitution, the Electoral Act as well as acceptable democratic practices.
Mohammed said that that Obaseki polled 1,952 while 72 votes were declared invalid from the 2,020 total vote cast.
He said that the total delegates were 3,234.
NAN reports that the result was declared by the chairman of the committee after it was confirmed by Independent National Electoral Commission officials as well as security agencies. (NAN)