Kwara State Government has announced the receipt of the sums of N4,202,659,072.11 (four billion, two hundred and two million, six hundred and fifty nine thousand, seven two naira and eleven Kobo) for the month of June, 2019.

The announcement was contained in a statement on Friday by Mr Benjamin Fatigun, the permanent secretary of the state ministry of finance, who represented Kwara at the FAAC meeting of June 27, 2019 in Kano.

Governor AbdulRahman AbdulRazaq, meanwhile, has directed the immediate payment of June salary to the state’s workers.

The wage bill comes to N2.2bn, according to a statement by the governor’s spokesman Rafiu Ajakaye. 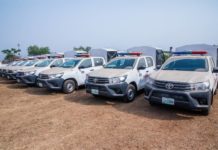