The mother of Gov. Seyi Makinde of Oyo State, Madam Abigail Makinde, was, on Friday, interred in...
Read more

The Air Transport Senior Staff Services Association of Nigeria (ATSSSAN) has expressed shock over the sack of 300 Arik...
Read more

Pope Francis is to sign a new encyclical called “Fratelli tutti” (All Brothers) in the Italian city of Assisi on Saturday. 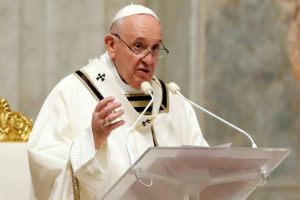 An encyclical is a letter containing an important teaching that is circulated by the pope to the Church.

This will be the pope’s third encyclical, and is said to be about brotherhood in the world and social cohesion.

More is not yet known about the contents of the text but its importance is underlined by the fact that the pope is travelling to the city where Saint Francis, the medieval monk famous for his love of nature, was born.

Born Jorge Mario Bergoglio, 83-year-old Pope Francis was the first pontiff to name himself after the monk, known for his poverty vows, love of nature, and rejection of violence.

It is also the pope’s first journey since the outbreak of the pandemic, when he stopped travelling as a safety measure.

Before signing the document, he is due to celebrate mass at St. Francis’ Basilica, one of the world’s most important Catholic places of worship, hosting the burial chamber of the medieval monk.

The Vatican is to present the contents of the encyclical a day later, on Sunday.

The latter, addressing the environment, was seen as a global clarion call to underline the need for climate protection and to combat poverty. (dpa/NAN)

The mother of Gov. Seyi Makinde of Oyo State, Madam Abigail Makinde, was, on Friday, interred in Ibadan, amidst emotional tribute from...
Read more
News

The Air Transport Senior Staff Services Association of Nigeria (ATSSSAN) has expressed shock over the sack of 300 Arik Air workers and faulted the...
Read more
Defence/Security

The Nigeria Institute of Soil Science (NISS) has warned against unsustainable soil management practices like misuse of...
Read more
- Advertisement -

At least four civilians have been killed between Thursday and Friday by the terror group, Boko Haram in Cameroon’s far north region,...
Read more

UAE celebrates cooperation with Nigeria as it marks 49th Anniversary

The United Arab Emirates (UAE) on Wednesday celebrated the growing cooperation with Nigeria as it marked the...
Read more

Police in India’s northern state of Uttar Pradesh have arrested a Muslim man for allegedly trying to convert a Hindu woman to...
Read more

The number of people living in extreme poverty will increase by more than 32 million in 2020 due...
Read more
- Advertisement -