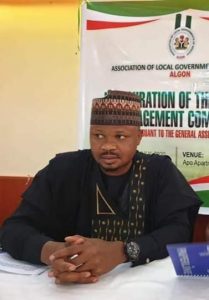 Chairman of the Interim Management Committee of Association of Local Government of Nigeria, Hon. Abdullahi Maje in an interview with AIT on the Democracy Today show on Tuesday reiterated how the dissolved Alabi Kolade David faction stole 5.2 billion naira funds meant for the 774 LGA through diversion for personal use.

The IMC describing the action of Alabi and his cronies as an action aimed at destroying the image of the association, revealed that it has in the line with the interview and that of attaining justice and uplifting the trampled image of the association, filed a fresh petition to the Economic Financial Crimes Commission and the Independent Corrupt Practices Commission to investigate and probe the above mentioned and his cronies.

In a statement signed and made available to newsmen on Thursday by the Publicity Secretary, the IMC implored the anti-graft agencies to uphold justice by performing duties in line of justice. It said “We are still concerned on why some people are still allowed to parade freely in the society especially after discovering their criminal tendency or activities. This is the umpteenth time we are calling out Alabi and co for their fraudulent practices in the association they hijacked leadership from, these persons stole from the association by diverting over five billion naira funds meant for the 774 local government from the federation account.

“Our Chairman, Hon. Abdullahi Shuaibu Maje duly answered invitation from major electronic media AIT on their Democracy Today Show aired on Tuesday, to speak on the diversion because we do not have anything to hide and we have evidence backing up our claims; permit me to say that the accused persons who were supposed to use the medium (we heard they were also invited) were nowhere found in the premise and on air, either because they can’t stand the truth, very scared of the media or because they are fully aware that there secrets will be made open on national television attracting a vote of no confidence from the general public.

“Alabi, Binta and co through the association, demanded for refund of funds meant for the 774 local government debited from the federation account by the use of auditors such as Impecca Services Limited and HRH Eze Samuel Ezekwo (Trading under the name and style of Chuks Samuel & co) and Chief Chikwe Udensi. The said auditors and representatives upon auditing the accounts, were able to secure the sum of N5,240,516,182.21 (Five Billion, Two Hundred and Forty Million, Five Hundred and Sixteen Thousand, One Hundred and Eighty-Six Naira, Twenty-One kobo) as the outstanding sum wrongly debited from the federation account been monies debited. The sum recovered was however not remitted to the accounts of the 774 local governments but rather diverted through connivance by Alabi and Binta to an account registered with First Bank of Nigeria.” It added.

The IMC revealing that through the fraudulent practices, Alabi and Binta, managed to secure a consent judgement to aid the sharing of the amount between themselves and the consultants, however begged the anti-graft agencies to spiral things by duly investigating the claims as enough evidence has been set aside to aid the investigations and effect prosecution.