The Chairman of the Edo State Chapter of the Peoples Democratic Party (PDP), Anthony Aziegbemi, has called for the arrest and prosecution of those behind the failed takeover of Edo State House of Assembly (EDHA) Complex. 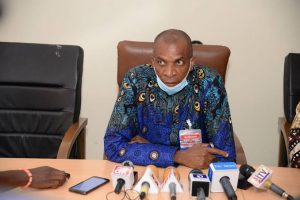 Aziegbemi, who spoke to journalists at the party’s Secretariat in Benin City, on Friday, said the incident was an attempted coup d’état, and an effort by the All Progressives Congress (APC) to upset the democracy enjoyed by the people of Edo State.

He said: “As we speak, there are 10 members of the EDHA; 24 members were elected but only 10 got themselves inaugurated. The law says there must be a proclamation, which was done by the governor and the High Court upheld it. With that proclamation a Speaker emerged in EDHA; 10 members were inaugurated while 14 were not.”

Aziegbemi said those that were not inaugurated should not claim to be members of the house as they were absent in the House for 180 days and their seats were declared vacant and the case is still in Court.

“If you are not a member of the Assembly, how then can you be the Speaker? The attempt to truncate democracy will not stand. We will pursue this to a logical conclusion, obeying the rule of law.”

The Edo PDP Chairman frowned at the position of the Commissioner of Police and Director of State Security Services who accepted and received the 14 elected lawmakers in their offices, adding: “For accepting to receive them, their neutrality is in doubt. Consequently, they need to be called in for questioning.”

He said Francis Okiye’s Speakership is backed by the law court as such he can’t be impeached.

“There is a High Court judgement that says Okiye is the Speaker of EDHA. The judgment has not been vacated. You can’t impeach a speaker outside the premises of the Assembly.

“A coup is a coup and if you use your private property for coup plotting, then the consequences that follow those that plot coup should also be applicable to you”

Speaking on the invasion of the EDHA, Hon. Ezehi Igbas said the action amounts to a clear disregard to judicial process and a treasonable felony.

He called on the Inspector General of Police, Mohammed Adamu and the Director of DSS to check the shameful action in order to avert the looming anarchy, adding: “If this unfortunate act is left unchecked by failing to arrest the perpetrators and their sponsors, it will spell doom for democracy and the lives and property of Edo people.

“I call on the speaker of EDHA, Rt. Hon. Frank Okiye and other members of the Assembly not to be intimidated or distracted as Edo people are solidly behind them.”

The Southern Senators’ Forum has commended steps taken by state governors from the region to stem the rise in insecurity.
Read more

The Peoples Democratic Party (PDP) in Zamfara has pledged to take appropriate action against members of the “True PDP” who recently set...
Read more
- Advertisement -