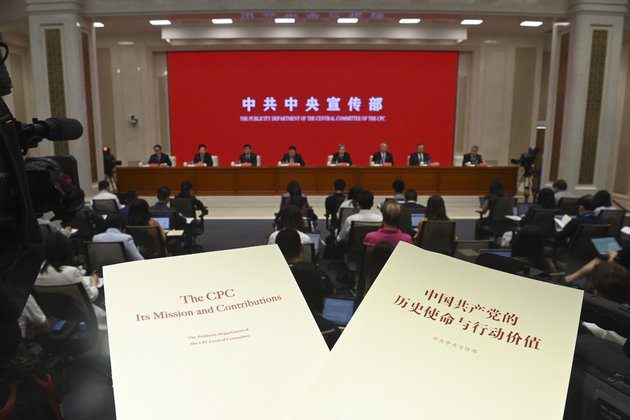 The Publicity Department of the Communist Party of China (CPC) Central Committee on August 26 released a publication on the Party’s mission and contributions.
The publication, titled “The CPC: Its Mission and Contributions”, was compiled under the guidance of the principles of the speech made by general secretary Xi Jinping of the CPC Central Committee at the ceremony marking the centenary of the CPC held on July 1, 2021, said Wang Xiaohui, executive deputy director of the Publicity Department of the CPC Central Committee, at a press conference.
It thoroughly introduces the 100-year history of the CPC, and expounds on the Party’s governance philosophies, practice, and achievements, Wang added.
The publication profoundly analyzes the sources of the CPC’s robust leadership and strong governance, saying that it is the CPC’s solidarity and unity, its firm leadership, and its strong governance capability that has rallied and united hundreds of millions of Chinese people and overcome a multitude of difficulties and crises.
The leadership system and working mechanism suit China’s national conditions and conform to traditional Chinese culture, said Wang, adding that this is an invaluable understanding that Chinese people have gained through years of CPC leadership.
By building the overall leadership system of the CPC and improving the national governance system, the Party will enhance its capacity to exercise power based on informed decisions, democratic process, and the rule of law, and ensure that its leadership is followed in all aspects of state governance.
The publication reviews both the experience and lessons it has learned. It says the CPC has always been able to maintain vigor and vitality despite the many hardships it has endured in the past hundred years. This is because it has constantly engaged in significant self-reform while leading people in a great social revolution.
To stay courageous to be engaged in self-reform, exercise effective self-supervision, practice strict self-discipline in every respect, consistently pursue improvement, and advance with the times is a fine tradition developed by the CPC over its course of governance, as well as a marked symbol of the Party, said Chai Fangguo, deputy director of the Institute of Party History and Literature of the Central Committee of the CPC.
The CPC never conceals its faults for fear of criticism or avoids and hides its setbacks. On the contrary, it faces up to and analyzes problems to withdraw wisdom and strength for further progress.
The Party takes resolute measures against all phenomena that may undermine its integrity and progressive nature. It promptly removes any virus or tumor detected to protect its health.
To practice full and strict governance over the Party, and improve its work style and strengthen party and government discipline is never an empty talk, said Wang Jianxin, an official with the Central Commission for Discipline Inspection of the CPC and the National Supervisory Commission.
The Party’s consistent and resolute determination to fight corruption has rebuilt its image, helping it take on a brand new atmosphere and reinforce its unity and solidarity, Wang Jianxin said, adding that revolutionary tempering has made the Party stronger, offering powerful political guidance and solid political underpinning for the development of the cause of the Party and the country.
In addition to regular education and day-to-day management, the CPC also carries out themed education programs focusing on the situations and tasks that it faces in any given period, and on the prominent problems that confront its members.
“We have launched five themed education programs since the 18th National Congress of the CPC. Strict political activities and conduct within the Party have eliminated wrongful thinking of some Party members, and ensured their high-quality development,” said Qi Jiabin, an official with the CPC Central Committee’s Organization Department.
The publication, with abundant historical facts and data, introduces that the CPC has made happiness for Chinese people and the rejuvenation of the Chinese nation its abiding goals from the outset.
Everything the CPC has done in revolution, reconstruction, and reform is designed to ensure a good life for the people. Chinese people are leading a comfortable life to which they have aspired for several thousand years, and they are working towards common prosperity.
Hard work is the fundamental pathway to common prosperity, said Han Wenxiu, an official with the Central Committee for Financial and Economic Affairs. Common prosperity is dynamic progress and cannot be achieved at one stroke, he said, adding that it’s also impossible that everyone is moving shoulder to shoulder.
While encouraging the pursuit of affluence through diligence and innovation, the Party should guarantee and improve livelihood amid development, enhance the level of equal access to basic public services, and build basic institutional arrangements that coordinate primary, secondary, and tertiary distributions.
The CPC is a political party that seeks happiness for the people and progress for humanity. At the press conference, Liu Jianchao, deputy director of the Office of the Foreign Affairs Commission of the CPC Central Committee pointed out that China will unswervingly implement true multilateralism, take its responsibility to maintain world peace, spare no effort to promote global development, set a role model for safeguarding international order, and make contributions to coping with global challenges, to build a community with a shared future for mankind together with the rest of the world.

Some foreign devotees at the just concluded Osun-Osogbo festival have expressed belief in the sanctity of the Osun deity, saying the annual...
Read more

Pakistan seeks to promote peace in its region – Envoy

By ZhuJinyi, LiuFawei Dubbed as the "kingdom of bamboos," China is home to over 800 of the world's 1,642 known species of bamboos. As of...
Read more
- Advertisement -