Graduands of ECWA Seminary charged to be agents of transformation 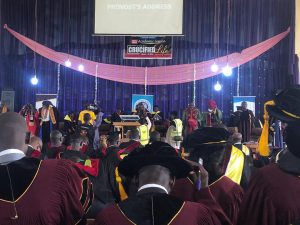 Graduating students of the ECWA Theological Seminary (ETSI), Igbaja in Ifelodun local government area of Kwara state have been charged to be good ambassadors of Christ and the institution by being agents of transformation “in this corrupt society and age we found ourselves”.

The Provost of the Institution, Reverend Dr. John Adetoyese, who gave the charge at the 57th convocation ceremony of the Institution on Saturday in Igbaja, noted that the graduands have received the needed training that would make them discharge their duties accordingly, especially now that the country is facing a trying time in the hands of kidnappers, bandits, Book Haram insurgents and other evils.

He said: “It is my prayer that the Lord will rescue this nation. We all understand that as we approach the day, the faith of many believers is waxing cold. Therefore, the Lord is counting on you for transformation as you are the light and salt of the world. Thus, be good ambassadors of Christ and this institution by being the agents of transformation in this corrupt society and age we found ourselves.”

While enumerating the achievements recorded during the session, the Provost said the institution is in dire needs of a car, a bus, a hilux van, solar street light, solar power, ICT hub, endowment fund and support for indigent students, among others, while trusting that the Lord would use well meaning people to meet those needs.

Reverend Adetoyese said in order to augment the poor financial position of the Seminary, the institution ventured into poultry business as a revenue earning avenue, adding that the project has taken off fully.

In his speech, the Chairman, Governing Board of ETSI, Elder Ayobola Samuel, said deficiency of righteousness in the conduct of national affairs by political leaders was largely responsible for the challenges and woes the country is experiencing and battling with, urging the graduands to ponder over the state and future of the nation and join forces with other people of God to lead their various congregations towards achieving a spiritual rebirth.

He said: “Nigeria is currently passing through a seemingly hopeless situation. There is insecurity everywhere, especially banditry and kidnapping; there is youth restiveness, there are separatist agitations and poverty is much in the land due to poor economic environment. No doubt, the nation is eagerly waiting for you graduands to be part of the transformation train.”

The outgoing Student Body President, Anise Seun Paul, in his remarks, lamented that the economy of the country is comatose, while government is leveraging on loans to finance projects without giving proper attention to issues pertaining to the safety of the citizenry and their property, adding that Nigeria needs prayers to wriggle out of its multifarious challenges.