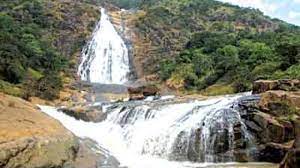 There was jubilation in Kwarra, the host  community of the 450 metres high Farin Ruwa Waterfall in Wamba Local Government Area of Nasarawa State, that the once moribund dam was being brought to life.

The torrential force of gushing water from the fall earned the fall the name `Farin Ruwa’( white water).

Located about 120 kilometres from Lafia, the state capital, people of the area were optimistic that when completed the dam around the water fall site would help to increase access to all-year farming.

initiated in 2004 to generate 2,000 hydropower electricity to enhance the socio-economic development of Nasarawa  State.

After many years of abandonment the Federal Government undertook to complete the project.

The Federal Government, through the Federal Ministry of Water Resources, in November 2020, awarded contract for the full completion of the dam to Messrs WE China Worldwide.

Minister of Water Resources, Suleiman Adamu, at the launching ceremony for the completion work of the Farin-Ruwa Multipurpose Dam recently, said that the Federal Government approved takeover of the project and allocated N8.14bn for its completion.

He also said that the Federal Government approved the expansion of the project to include a regional water scheme and construction of irrigation infrastructure of 2,000 hectares for dry season farming.

Adamu said the contract, which had a 24-month timeline, comprised the completion of the dam embankment, spillway and outlet works.

He added that it would include water supply and hydropower components, 20 kilometres of access road and the rehabilitation of some service quarters that were under construction before the project was abandoned.

The minister commended the state government for the foresight in initiating the project and provision of necessary logistics for smooth takeover.

He promised that the project would be completed within the stipulated period and according to specifications.

Governor of Nasarawa State, Abdullahi Sule, who also spoke, at the event, sought the intervention of the Federal Government to enable the state generate 50 megawatts of power from the dam.

According to him, the entire Nasarawa State requires about 10 megawatts of power, with the remaining 40 megawatts to be generated, to be uploaded to the national grid to power the Federal Capital Territory (FCT).

The governor, who described the Farin Ruwa falls as one of the most beautiful waterfalls in the world, said the minister would write his name in gold if he carries out the project successfully.

Sule said that when he visited the waterfall, he discovered that the biggest challenge was road infrastructure, and therefore awarded N3 billion contract for the road network leading to the site.

He pointed out that even though the original concept by the first civilian governor of the state was to produce 25 megawatts of power, his administration has a vision to upscale the project to 50 megawatts.

“As an engineer, I can see that, at the table of the fall, 25 megawatts can be easily generated. Then you have the dam. By the time the water floods and with 73 million  litres of water, coupled with the depth of the dam, you can easily generate another 25 megawatts.

“Ten megawatts is enough to power the entire Nasarawa State, you have 40 megawatts to go to Abuja,” Sule explained.

A traditional ruler, Alhjai Musa Nagogo, who also spoke, expressed joy that the once abandoned dam site was considered a priority by the Federal Government.

Nagogo said that completion of the project  would change the town into an economic hub.

“We sincerely want to appreciate the governor and the Minister of Water Resources for taking over the abandoned project, so that the livelihood of the population will be improved.”

A water resources expert, Mrs Victoria Yusuf, on her part, called on all stakeholders to do more towards harnessing the water resources potential of the country’s dams for hydropower, tourism opportunities among others.

“We are looking at opportunities in tourism, Nigeria has lots of dams that can be used in recreational activities and these are areas that we are looking into. “We want tiers of government to partner  some investors particularly on Gurara Dam.

“We can also build a beautiful tourist resort around that place with lots of amenities.’’

Stakeholders say that passage of the National Water Resources Bill, still before the National Assembly, would help  actualise the road map and reforms in the water resources sector.

They also called for commitment from the contractors and other stakeholders to complete the multipurpose dam within the stipulated time.