The story of Kashim Shettima, former Governor of Borno State, now’ Distinguished Senator representing Borno Central Senatorial district in the National Assembly, could be likened to that of the hunter, who picked what he thought was a puppy during a hunting expedition, only to realise that it was actually a baby lion on returning home. 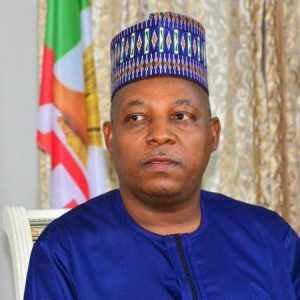 From the background of a university lecturer, Shettima became one of the Most successful but quiet bankers north of the Niger. His records in Zenith bank where he was discovered and picked for political office speak volumes about Kashim Shettima’s rise to Stardom.
As a commissioner in the cabinet of Senator Ali Modu Sheriff, the then Governor of Borno State, Shettima distinguished himself so we, and was on the move very frequently from one ministry to another, where he set standards in job delivery and resources management.
Many of his colleagues thought he was over pampered, but most of us also could not deny the fact that he was ahead in meeting the expectations of our boss.
Regarded as a greenhorn in politics at that time, nobody gave him the chance of being picked as Sheriffs successor. Even when he eventually emerged, so many people, including the then Governor, Ali Modu Sheriff, thought the furthest he could go is a one tenure Governor. What was not known to all of us, was that, Kashim Shettima deliberately concealed his potentials like the lion cub, and when they began to manifest as he took full control, there seemed no stopping him, not even by the forces we thought were indispensable.
He conquered the political space and rendered those who wrote him off voiceless. Even his ardent critics hailed him as the emergent political force from the Sahara. He went on to become the Chairman of the Northern Governors Forum at a very challenging time. He made the greatest impact of that office, leaving behind an oversized shoe.
I often tell people, that, Kashim Shettima is the type, that. the more one tries to know him, the further one tends to get away from his concealed personality.Even those who loath him, do secretly admire his intellectual candour, his mastery of English and his delivery if speech
Kashim Shettima can mesmerize even the best of orators whenever given the opportunity to make public speeches.
Very often, when he rises to speak in the Senate, Shettima holds his colleagues spell bound and delivers his message with the mastery of a born orator.
I cannot help agreeing with one of my friends who observed that Kashim Shettima reads so many books, especially philosophical books, and that explains why he could quote so many philosophical texts in a row with such precision that one may think he is the original author.
He is what journalists describe as a reporters delight, when he begins to philosophise on contemporary events marrying same with past philosophical forecasts.
His sheer intellectual bravado has endeared him to so many people, including his older colleagues in the red chambers, and political pundits rate him amongst Nigeria’s upcoming politicians to watch in the nearest future.
I have had my very bitter quarrels with him and could claim to know him very well. One aspect of him I am yet to comprehend is Kashim Shettimas ability to win the confidence of people, including his arch enemies. Such men are rare nowadays.
He often reminds me that we are contemporaries and compatriots, but he is far ahead in so many things. And it is because I do not hope to ever catch up with him in those areas he has comoarative lead, that I regard him more as my boss, much mire than my friend, even though he prefers we relate as friends. Happy 54th birthday my boss friend Distinguished Senator Kashim Shettima.