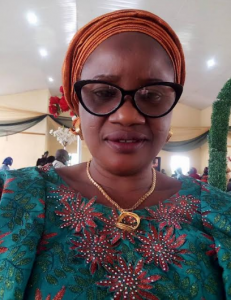 Stakeholders and members of the All Progressives Congress (APC) in Ilorin East local government area of Kwara State, have hailed the election of Hajiya Falilat Muhammed Odegbangba as the party’s state Woman Leader.

In a statement by the APC’s Secretary in Ilorin East, Comrade Habeeb Salman Olesin, the stakeholders described the new APC Woman Leader as a round peg in a round hole.

“There is no doubt that Hajiya Falilat’s track record as a well educated, progressive minded, women mobilizer and most importantly an age long, die hard loyalist of Governor AbdulRahman AbdulRazaq earned her this opportunity.

“Hajiya Falilat is a well known leading face of ‘O to ge’ struggle who has always been in the fore front since the administration of the late Governor Muhammed Lawal,” they added.

They added: “We therefore pledge our continued support and unalloyed loyalty to His Excellency and pray to Almighty Allah to guide and protect our leader, mentor and role model.

“We also assure His Excellency that the newly elected state Woman Leader is capable and competent to take the party to greater heights as her wealth of experience as woman mobilizer and a retired civil servant.”

The Speaker, Plateau House of Assembly, Mr Abok Ayuba, has been impeached by eight of the 24 members of the legislature. The unusual sitting...
Read more

By Stephen Olufemi Oni, Ilorin The new Chairman of the Kwara State All Progressives Congress (APC), Prince Sunday Fagbemi, has stated that he has...
Read more

By Stephen Olufemi Oni, Ilorin The new Chairman of the All Progressives Congress (APC) in Kwara state, Prince Sunday Fagbemi, has stated that the perceived...
Read more
- Advertisement -