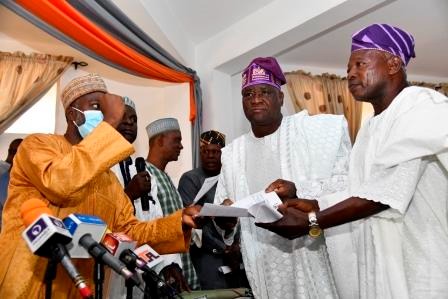 Presenting the letters to the monarchs on behalf of Governor AbdulRahman AbdulRazaq, the Commissioner for Local Government, Chieftaincy Affairs and Community Development, Arch. Aliyu Mohammed Saifudeen, said the presentation followed the approval by the state government, having been ratified by the Council of Chiefs in the state.

AbdulRazaq said: “The event again has demonstrated the respect of our administration for the traditional institutions and we urge the traditional rulers to continue to carry their people along in the discharge of their responsibilities to their communities, and to support the state government’s policy thrusts in their domains.

“It is my fervent prayer that your reign will enhance peace, progress and development in your various domains and the State at large.”

In his welcome address, Commissioner Aliyu Mohammad Saifuddedd, who was represented by Permanent Secretary Abdulrazaq Babatunde Alabere, said the event was a dream come true for the appointees, urging them to use the numerous human and material resources at their disposal for the good of their people and to enhance accelerated developments 7 in their respective domains.

Responding on behalf of the new three traditional rulers, the Olupako of Share, Oba Haruna Olawale Suleiman, lauded Governor AbdulRazaq for the respect his administration has been according the traditional institution, saying “the appointments were given to us on trust and we shall continue to do our best to promote peaceful coexistence in our domains and as well give our support to the government’s policies and programmes.”

On his part, the new Onijara of Ijara-Isin, Oba Ajibola Ademola Julius, said: “My emergence was through fair contest and this was the reason we have no litigation after the announcement. Indeed, this is a new era, I seek the support of all sons and daughters of Ijara-Isin to come together and let us build our kingdom.”