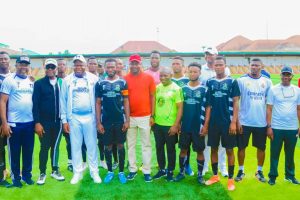 Key stakeholders in the sports sector have given thumps up to the organizers of this year’s Bayelsa State Governor’s Cup tagged Prosperity Cup.

The tournament which has become Nigeria’s biggest grassroots competition is currently at the round of sixteen with two teams in each Local government.

In separate interviews with Radio Nigeria in Yenagoa, the stakeholders described the 2022 edition as the best since the inception of the showpiece.

Secretary of the Bayelsa State Football Association Mr. Diseye Nwankwe said the current edition has new innovations compared to previous editions with the introduction of foreign scouts, pointing out that the organization of teams has also witnessed tremendous improvement.

He explained that this this year’s Governor’s Cup has moved from mere scouting of general talents, to selection of younger talents within a particular age bracket, stating that the increase of the participating teams was as a result of smooth organization.

Veteran sports journalist, Mr. Loveday Herbert noted that he was impressed with the level of commitment and skills displayed by the various teams, saying that with what he has seen so far he is optimistic that the teams would produce players that would feature in the cadet national team.

Mr. Herbert who likened the Prosperity Cup as Youths Sports Federation of Nigeria, and advised the organizers to expand the scope of the competition by inviting teams from outside the state, describing the tournament as a festival.

Also, Assistant Technical Director of the Prosperity Cup, Sunny Nehru asserted that there is a huge progress in the current edition of the showpiece, stressing that due to number teams taking part, they had to apply some administrative technicalities to accommodate all the teams by creating more centers across the state.

He explained that this year’s edition has twenty centers, whereas four centers will be used in the round of sixteen, two venues for the quarter final, while Samson Siasia Stadium will host the Semifinal as well as final.

Yenagoa local government has the highest number of teams participating in the round of sixteen and they are Amarata FC, Akaba FC, Eternal Grace Ministry EGM Fc and Opolo FC.