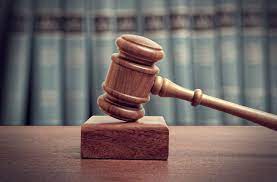 An Abuja Upper Area Court in Zuba, on Tuesday sentenced a 21-year-old labourer, Okolowa Segun to 12 months imprisonment for stealing bags of clothes and shoes.

The Judge, Gambo Garba, sentenced the convict, after he pleaded guilty to the charge and pleaded for leniency.

Garba, who gave Segun an option to pay a fine of N20,000, warned him to desist from crimes.

Earlier, the prosecution counsel, Chinedu Ogada told the court that the convict committed the offence at Gwarinpa, on June 22.

Ogada said the complainant, Uju Ezeh of House No 5, road 21 Gwarnpa Estate Abuja, reported the matter at the Gwarinpa Police Station on June 22.

Ogada said that the convict scaled the complainant’s fence, broke into her house and stole her  bags containing clothes and shoes.

The prosecutor further explained that the convict sold one bag, clothes and shoes at N10,000  and converted the money to his personal use.

Ogada said that during police investigation, two bags contenting clothes and shoes were recovered from the convict.

He said that the offence contravened the provisions of sections 348, 346, 288, of the Penal Code.