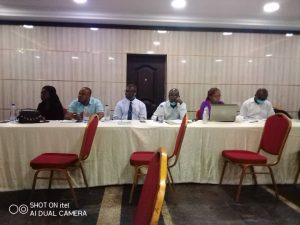 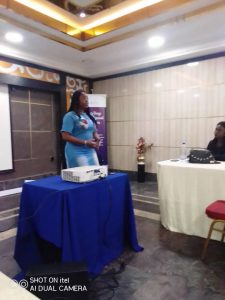 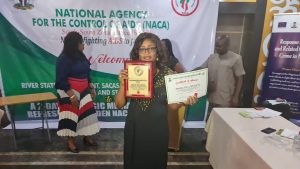 The Bayelsa State Agency for the Control of AIDS, BYSACA has received an award in recognition of its outstanding performance to institutional systems strengthening and growth of the Bayelsa State HIV response.

Dr Azebi noted that the award which serves as a recognition of the achievement of BYSACA would be a motivation for the management and staff of the agency to put in more effort to sustain the coordination of HIV services in the state.

She commended NACA South-South Zone for providing assistance to BYSACA in the strategic coordination of policies and programs for HIV activities in the South-South.

In her response, South-South Zonal Coordinator, Dr Uduak Daniel said BYSACA under the leadership of Dr. Azebi has recorded huge success in the fight against HIV/AIDS hence the award is well deserving of the agency.

Also speaking, Chairperson of the Bayelsa HIV Media Advocacy Group, Mrs Ebizimo Oroyi commended all staff of BYSACA for their hardwork, dedication and commitment in ensuring that the agency carry out it’s duties effectively.

The event was well attended by top government functionaries in Rivers State, the media and all management staff from the State Agencies for the Control of AIDS, SACAs in Akwa Ibom, Bayelsa, Cross Rivers, Edo, Delta and Rivers States.


The Federal Government has reaffirmed its commitment to protect fire fighters and their equipment from physical attacks while responding to emergencies and disasters.

Sola Fasure, the Media Adviser to the Minister of Interior, Mr Rauf Aregbesola quoted him as re-affirming the commitment in a statement issued on Tuesday in Abuja.

According to him, the minister made the assertion in Calabar at a fire and safety advocacy visit and the inauguration of a firefighting truck by Gov. Ben Ayade of Cross River.

“There have been saddening reports of attacks on our personnel and equipment whenever they are out in response to distress calls. This makes it difficult for them to even carry out their assignments.

“Our communities now should stand up and own the firefighting equipment procured and deployed for their use at a huge cost.

“They should be the first line of defence for them in the face of attacks from vandals and unruly elements.

“Let us honour and respect ourselves by refraining from impulsive attacks on fellow citizens who are simply attending to our needs, albeit officially,“ the minister said in the statement.

Aregbesola disclosed that armed personnel of the Nigeria Security and Civil Defence Corps (NSCDC) would henceforth accompany firefighters while carrying out their legal duties.

“We are making arrangements to accompany every mission with armed personnel. They will be empowered to take all necessary actions to protect our personnel and assets from any form of attack.

“Any assault on officers and men in the fire service is an assault on Nigeria and our sovereignty. The personnel are Nigerians with families, human rights and stake in our nation.

“Attack on any of the personnel is equally an attack on a Nigerian with emotional tie with other Nigerians,” the statement.

While acknowledging the support of President Muhammadu Buhari for the ministry and its agencies, the minister noted that the Federal Executive Council (FEC) on March 3 approved N10.4 billion for infrastructure upgrade at the Federal Fire Service (FFS).

This, he noted, had so far enabled the service to procure 44 additional firefighting engines, 15 water tankers, 15 rapid intervention fire engines.

“These machines can go into the nooks and crannies of any community to respond to distress calls with 20 basic life support ambulances.

“I must, therefore, thank the President for his continued interest and support for our ministry and the four agencies, including the FFS.

“Under him, the service has grown phenomenally. With the deployment of 141 fire engines and 6,000 personnel between 2016 and now across the country to boost emergency response.

“FFS is now present in all the states of the federation and most responsive, saving lives and preventing humanitarian and economic disasters.

“These trucks and equipment have been spread round the country to strengthen the various state commands of the FSS and we are very pleased to inaugurate the truck deployed for use in Cross River.”

In his remarks, the Controller-General (C-G) of FFS, Dr Ibrahim Liman, urged the governor to also extend a hand of support to the service in the state.

Liman noted that deployment of the modern fire service truck to the state was meant to assist the firefighting efforts.

“The fire truck we are inaugurating is a huge national asset, requiring optimum maintenance and fuelling.

“We crave the indulgence of the state government to facilitate deployment of utility vehicles to support the operation of the vehicle.

“We want you to sponsor personnel of the state fire service for local and foreign training in view of emerging trends in firefighting and the inclusion of the Federal Fire Service in the State Security Council,” he said.

Ayade, who was represented by his Deputy, Prof. Ivara Esu, commended the leadership attributes of the minister.

“Aregbesola is a round peg in a round hole, a square peg in a square hole.

“His views about Nigeria are nationalistic and must be commended. He’s the type of leader that Nigeria needs,” the governor added.

Ayade stated that his administration would do its best to sensitise the public on why such assets deployed must be protected at all cost.

“We will do our best to make sure we take good care of the multimillion naira equipment that have been deployed to our state.

“We will carry out major advocacy as regards fire prevention, control and particularly, the protection of the firefighters and equipment,” the governor said.

“We will immediately begin our advocacy campaign and ensure our people protect the equipment. We will also use the opportunity of free training afforded to us at your training school here in Cross River.

“I will also look into the requests of the C-G and work out modalities of acceding to all his requests,” he promised.