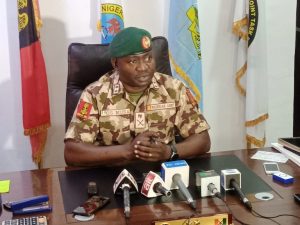 Musa, in an interview with newsmen on Wednesday in Maiduguri, explained that the action of the military in receiving surrendered terrorists was in line with international laws and best practices.

He said that even during combat, when an enemy surrendered, the capturing forces were by law, not allow to shoot that individual.

According to him, the military is meant to hold, arrest and treat the surrendered enemy humanely.

“So there is no aspect of pampering.

“We are just keeping them as humans to ensure that they are fit enough to go though proper procedure and they will definitely go through this procedure.

“Again, let me assure the public that there is no any aspect of pampering, we are sorting them out so that those that didn’t play any part will be handled separately while those ones that took part actively, the combatants, will be treated separately,” he said.

The theatre commander however urged the remaining terrorists to come out and surrender now that they had the opportunity to do so.

He advised them to understand that they could never win the war against the state, urging them to disarm and come out and join the nation to develop a greater Nigeria for the future of the younger generation.

“I am sure that even they too want their children to have a conducive atmosphere where they will grow and where they will be development because staying in the bush and killing people will not provide that.

“They should not allow anybody to deceive them into taking arms against the nation. They will never win and they can never win.

“And so it is important for them to understand that anybody who disarms will be treated fairly according to international laws,” he added.

Musa explained that some of those that surrendered were being sorted out, adding there are some that were conscripted forcefully, some grew up in the system without knowing what was going on, while some were held as ordinary slaves and used as farmers.

He assured Nigerians that all the surrendered terrorists would be properly profiled, adding that the law would take its full course.

“So we want to reassure the citizenry that we are on top of the game, we assure them that we will continue to do our best to ensure that peace returns to the north east which is our mandate,” he said.