The National Economic Council (NEC) says 16 states have so far received N100 million grant each from the World Bank to ease the impact of the COVID-19 lockdown. 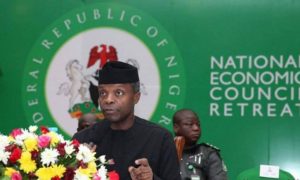 The virtual NEC was anchored from the Presidential Villa, Abuja.

The World Bank recently made a proposal of 1.5 billion dollars to states as part economic stimulus to cushion the impact of the COVID-19 pandemic.

Sule said that the council received the Progressive Report of its Adhoc Committee interfacing with the Presidential Taskforce (PTF) on COVID-19 to ease the lockdown of the economy.

The governor said that the report stated the summary Review Status of States Incident Acton Plan (IAPs) as at Aug. 5.

“All states had submitted IAPs; 35 states cleared by the World Bank; 22 signed Grant Agreement (GA) and 13 yet to return signed GA.

“Five states next on the list of payment are – Plateau, Yobe, Ondo, Benue and Osun; one state is yet to communicate account details- Nasarawa.’’

The governor said that the key highlights of the current four weeks guidelines of the extended second phase were also presented.

On security, Sule said that NEC also received an update by its Adhoc Committee on Security and Policing.

He said that NEC, in its meeting on June 20, deliberated extensively on the persistent security situation in the country especially the activities of Boko Haram insurgents in the North East, which had remained a delicate challenge.

“Based on this, council set up an Ad-Hoc Committee on security and policing headed by the Governor of Ekiti state.

“Activities of the Ad-Hoc Committee–the committee met on Thursday Aug. 4 to review the escalating security challenges in the country

“It had a virtual meeting where briefings and presentations were received from the NSA, IGP, Chief of Defense Staff and the Department of State Services (DSS).

“The meeting held to review the escalating challenges in the country observed that insecurity cannot be fully eradicated without addressing the high poverty rate and unemployment level in the country;

“The Office of the NSA has not been adequately funded in the last five years to enable it carry out its mandate effectively.

“State governments have been overwhelmed by insecurity expenditures and there is therefore the need by the Federal Government to inject more funds to augment expenses by the states, amongst others,’’ he said.

He said that the meeting made several observations and came up with recommendations that would help government tackle the issue of insecurity in the country.

Sule said the committee’s work was still ongoing as it would be meeting further with stakeholders.(NAN)

The Federal government says the Lekki Deep Seaport will be a significant game-changer in Nigeria’s Maritime economy with corresponding benefits to the...
Read more

The Lagos State Government says it has credited the Retirement Savings Account (RSA) of 358 retirees with more than N1 billion for...
Read more