Joe Biden accepted the nomination of the Democratic Party to become president of the U.S., in a resounding speech on Thursday that sharply denounced President Donald Trump’s handling of the coronavirus pandemic. 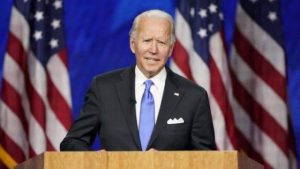 The mostly-forward looking address from the former vice president declared that “hope is more powerful than fear,” and vowed to get a grip on the virus and the recession from the first day of a Biden presidency, including by enforcing a mask mandate.

The forceful address, given without a crowd because of the pandemic, and therefore lacking the normal cheers and applause, seemed also designed to lay to rest attacks on Biden from the Trump camp that the 77-year-old had become mentally feeble.

“May history be able to say that the end of this chapter of American darkness began here tonight,” Biden concluded, before stepping outside the building with his wife Jill, to wave to masked supporters who waited at their cars, at a distance, as fireworks erupted.

The party united around Biden in the lead-up to the speech, in a barely disguised effort to remove any doubt about fault lines within the leaft-leaning bloc.

Several of the most prominent Democrats who ran against Biden gathered for a digital sit-in just before the final acceptance speech, to share jokes, praise the nominee and present a determined front against Trump.

They presented Biden as an empathetic down-to-earth person who will run a coherent White House, with policies that would offer something to the left while not upsetting disgruntled Republicans the party is courting.

Over four days, the party highlighted support for Biden from figures on the social-democrat left, such as Senator Bernie Sanders, and Republicans who crossed party lines, as it became clear the coalition was against the current occupant of the White House.

While Biden pledged to create jobs and fight climate change, his focus was primarily on presenting a vision that would be starkly different from the what was described as brash populism and chaos of the Trump administration.

“This is a life-changing election. This is going to determine what America will look like for a long, long time,” Biden said.

Just ahead of Biden’s acceptance speech, the Democratic National Convention gave the stage to a 13-year-old boy with a severe stutter to speak about his interaction with the nominee, in a move that was clearly determined to tug at heart strings.

Biden has himself addressed his own stuttering issue, recalling being mocked as a young boy and which at times still trips him up.

The boy, Brayden Harrington, had met Biden in New Hampshire and said he took courage from the former vice president’s story.

“Kids like me are counting on you to elect someone we can all look up to,” Harrington told the convention over a video-link.

The host for the evening was Julia Louis-Dreyfus – known from TV shows “Seinfield” and “Veep” – who handled the cross-overs much like the emcee of the Oscars or other awards shows, adding comedic flair to what was often an affair with grim overtones.

Trump tried to distract from the Democrats by going on television just as the convention was getting under way, to slam his opponents and cast doubt on the election outcome, a recurring theme that has sparked worry among his critics.

“It’s a fraudulent election, everybody knows it. You don’t even have to know politics to know it. They’re trying to steal the election,” Trump said during an interview with Fox News host Sean Hannity.

Ealier in the day he had described them as “stone cold crazy… these people have gone insane.”

He later told Fox the Democrats had “tremendous hate.”

The Democratic convention focused on themes of the pandemic, joblessness, growing gaps between rich and poor, and racism.

The Republican convention gets under way on Monday, with Trump to be nominated.

The centre-right party has kept much of its plans under wraps, amid signs it is hastily still putting together a programme. (dpa/NAN)