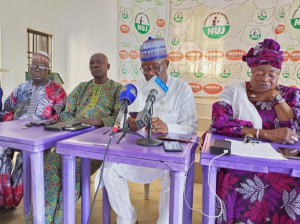 Claims by the Minister of Information and Culture, Alhaji Lai Mohammed, that he funded the 2019 general elections in Kwara State are “false and self-serving”, Secretary of the State All Progressives Congress (APC), Alhaji Mustapha Ishowo has said.

Addressing a news conference on Thursday in Ilorin, the party scribe, who was also a principal officer of the party in 2019, condemned what he called the minister’s dictatorial and divisive tendencies and said it was uncharitable of him to have claimed funding the election campaign of Governor AbdulRahman AbdulRazak.

Berating the Minister for his penchant for baseless self-promotion through outright lies and falsehood, Ishowo described the minister as a dictator who does not tolerate any opposing views, saying the Governor’s crime since the campaign period was his insistence on mutual respect, equity, and transparent use of campaign funds.

“As a party elder, one would have been quiet because it is always important to give room for peace and reconciliation, no matter the situation. However, silence in the face of tyranny and naked falsehood may be interpreted as agreement or consent. Having read the interview of Alhaji Lai, the impression is that he has not changed one bit from his old self. Alhaji Lai Mohammed is egocentric and always economical with the truth. He is always given to self-promotion and clout chasing,” Ishowo said.

According to the party chieftain, the claims in the interview by the minister were self-serving and not representative of the truth.

“Alhaji Lai had for long taken advantage of the governor’s coolheaded nature. Maybe it is time to really open the can of worms for the world to better know Alhaji Lai for who he is. Alhaji Lai is divisive, territorial, dictatorial, and is never a team player. His claim of funding elections is bogus and typical of his lies. He was nowhere to be found during our campaigns which he not only boycotted but also directed all his hirelings to also boycott,” he said.

“The then governorship candidate ran and led his own campaign across the state, day and night. This was heavily bankrolled by the candidate himself. He also donated hugely to the campaigns of other candidates, even when he had his own election to run. This is the fact, and any claim to contrary by Alhaji Lai and his followers is synonymous with his widely acclaimed epithet: lie.”

Ishowo also narrated that the minister was always promoting factions with his notorious Lai Mohammed Campaign Organisation (LAMCO) which he has refused to disband after many years of contesting and losing elections.

“Alhaji Lai Mohammed is an extremely divisive figure who hides under his position to discriminate against and oppress other party elders and members alike. He does not tolerate dissent under any guise. He is notorious for promoting tendencies, especially placing people from his Lai Mohammed Campaign Organisation, aka LAMCO, above every other person. Whether in Kwara South, North or Central, this has been his problem with other party elders and chieftains alike.

“Alhaji Lai Mohammed’s claim that he funded the APC election campaign in 2019 is a fallacy. Anyone who knows Alhaji Lai Mohammed knows he cannot part with his kobo. The claim that he bankrolled the governor’s campaign is an empty boast that every serious party member and elder knows to be false. If anything, he was simply cornering party funds for personal promotion and use. The motorcycles he was talking about were donations to the party which he was forced to share after a tug of war and subtle threats of reporting him to the party’s national secretariat and the donors. Indeed, rather than warehouse such donated items at the party secretariats, they were kept at his LAMCO office. This shows his nature as a sectional and maximum ruler.

“I urge people to be wary of Alhaji Lai Mohammed. Not only does he lie so effortlessly, he is a tyrant who does not care if heaven falls for as long as his agenda is served. Our disagreement with him started when we asked him to account for the humongous donations made to the party for campaign. They refused to be accountable. They outlawed anyone who asked them question. Is that the person boasting to the whole world?”