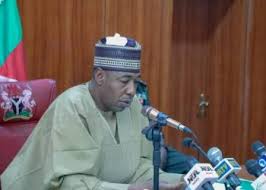 Our correspondent reports that Malam-Fatori, located in the fringes of Lake Chad, was occupied by insurgents for about six years forcing residents to flee to Niger Republic.

Zulum who led a sanitation exercise to the area and assessment of safety of the town for resettlement, gave each male beneficiary N10,000 while women got N5,000 with a wrapper each

Zulum’s visit, is the latest of more than five previous visits, for assessments and reconstruction of homes and public services destroyed by Boko Haram during their violent occupation.

In 2021, the governors inaugurated a committee to work out modalities for reconstruction and resettlement, same way communities in Baga, Banki among others, were rebuilt and resettled.

Zulum explained that safe relocation of civilian population to Malam-Fatori will hopefully commence by end of November 2021, after which Government will explore the possibility of returning people to Abadam town, which was also occupied by insurgents.

He expressed appreciation to the President of Niger Republic, Muhammadu Bazoum, the Governor of Diffa Province, Issa Lameen and humanitarian officials for their tremendous support to refugees from Borno who lived in Niger since 2014 when they fled from insurgent attacks on their communities in northern parts of Borno.

The forum of Kogi former political office holders says Peter Obi, the Presidential Candidate of Labour Party is not a threat to the victory...
Read more
- Advertisement -