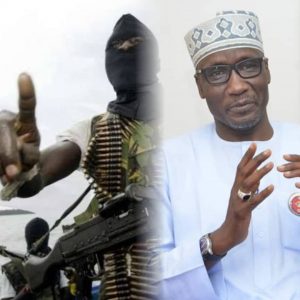 Niger Delta Ex-Militant leaders from the Nine States in the region have unanimously countered and faulted the threat made by a Niger Delta Youth group, Niger Delta Youths Council headed by  Jato Abido to embark on a mass action Protest against the GMD NNPC, Engr Mele Kyari and the management of Nigerian National Petroleum Corporation (NNPC) if they fail to include more states of the region in the N621billion road rehabilitation plan.

The Niger Delta Youth Council group had announced that it is mobilising its members to occupy the National Assembly complex and the Nigerian National Petroleum Corporation (NNPC) headquarters in Abuja within the next 48hrs or thereabout.

According to the group, it will carry out the action until the decision of the federal government to exclude the Niger Delta in its plan to reconstruct more roads in the region is rescinded.

But the Ex-Militant leaders with the Peace Advocate Groups under the aegis of the Niger Delta APC Youth Vanguard (NDAYV), the Niger Delta Advocate for Peace and Good Governance (NDAPGG) and the Coalition of Concerned Ex-Agitators for President Muhammadu Buhari Support Group (CCEPMB), in a joint statement, arising from an emergency meeting held in Warri Delta State described the threat of mass action protest plan to occupy the NNPC TOWER as Misplaced, Outrageous, myopic, diminishing and a decision that could incite violence in the Federal Capital Territory and the Niger Delta states if not properly handled.

The Coalition of Ex Militants Leaders and the Peace Advocate Groups led by the National Convener, GEN, FIAWEI PATHFINDER, (NDAYV), GEN KOROYE ADOKEME, (NDAPGG) and GEN JERRY, AKA KING OF THE BOYS (CCEPMB), stated that they will not fold their hands and allow some group of persons, allegedly sponsored by a group of corrupt minded politicians from the opposition party PDP in the region to cause tension and violence that will destroy the improved oil and gas sector of the nation’s economy that is been build by the Group Managing Director NNPC, Engr Mele Kyari “Neither will they accept such threats from non-existing groups to ferment crisis in the region wish could impede the existing relative peace in the Niger Delta, It may lead to destruction of oil exploitation activities in the Niger Delta if they decided to follow these fictitious groups.”

“However, we condemned in totality the purported threat suspected to be sponsored by some corrupt minded politicians in the opposition party PDP from the region who are trying every means to ferment trouble and to incite crisis in the region to give a bad light to the President Muhammadu Buhari led APC federal government. We call on such vicious groups to desist and retrace their footsteps from the proposed plan to protest and block the NNPC TOWER gate in Abuja . We believe the protest is sponsored and targeted to blackmail and rubbish the good image of the GMD NNPC Engr. Mele Kyari and calling for the resignation of the Minister of State for Petroleum Resources, Chief Timipre Sylva in other to malign the duo in bad light before the general public and the presidency”.

“Therefore to this end, the three groups from the Niger Delta region made up of Ex Militants and stakeholders from the Oil producing communities cut across the nine states of the Niger Delta call on the law enforcement agencies, the Inspector General of Police, the Director General of Directorate of State Security Services DSS and Security agencies to put drastic measures not to allow such nefarious and illegal activities to take place in the capital territory of Abuja and we urge the security agencies to be at red alert and on our side as a law abiding groups who are core believers in support of President Muhammadu Buhari and also in support of the laudable job of the GMD NNPC Engr Mele Kyari is doing to transform the nation oil sector, will not fold our hands or close our eyes and allow such miscreants to carry out the purportedly sponsored plan protest in Abuja”

Also, the coalition also commended the GMD NNPC Engr. Mele Kyari and the Minister of State for Petroleum Resources, Chief Timipre Sylva on their performance in the oil and gas sector of the economy in the last two years.

“The controversy trailing the approval and the announcement of N621 billion naira from the NNPC to take over the rehabilitation and reconstruction of some major federal roads across the thirty six states of the country at Federal Executive Council meeting in Abuja some weeks ago for wish some Niger Delta states were not captured in the list but one or two oil producing states were included in the above list and with reliable information before us, more Niger Delta oil producing states in the south south will be included in the next phase and the management of NNPC under the amiable dynamic transparent Leadership of the Group Managing Director Of Nigerian National Petroleum Co-orperation, Engr Mele K Kyari, arrangement is ongoing as we speak.

“And to put the record straight before the general public to draw the attention of the so called self-acclaimed one man show Organization called Niger Delta Youth Council led by One Jato Abido, the GMD Of NNPC in the person of Engr. Mele K Kyari has worked hard tirelessly to reposition the Nation oil and gas sector with sleepless nights to galvanize and transformed the oil industry transparently without any corrupt practice with his five point agenda of TAPE ( Transparency, Accountability, Profitability and Excellence) service delivery, when he came onboard as a core technocrat with humble background, very Resourceful, Innovative, Transparent, Incorruptible and Unblemished with exemplary leadership qualities, the GMD NNPC had attracted more robust multi billion dollar gigantic Infrastructural Developmental projects in the creek of Niger Delta region since he was graciously appointed by President Muhammadu Buhari as the 19th GMD NNPC.

“And for avoidance of doubt, the Group Managing Director NNPC did everything humanly possible to deploy all available Resources within his reach to engage the 9th National Assembly with the presidency to make sure the Petroleum Industry Bill PIB, Now PIA, was passed by this 9th National Assembly on the 1st of July this year 2021, this is one major Important Achievement to the feathers of this present GMD Of NNPC, just within two years in office, and this is one of the most important bill that has been delayed for over 20years in the hands of previous GMDs who served under the maladministration of 16 miserable years of PDP.

“And it is also on record that the GMD NNPC have used his good office to liaise with the Minister of State Petroleum Resources, Chief Timipre Sylva to make sure the Brass Fertilizer And Petro – Chemical Company project for methanol plant was approved, a project that was initiated by the GMD of NNPC that will employ over 3,000 youths in the deep creeks of Bayelsa state, And also with the frantic efforts of the GMD NNPC, Engr Mele Kyari who threw his full weight behind the approval of the establishment of Brass Petroleum Product Terminal Limited, BPPT, was approved with the sum of over N10, billion naira project that will be sighted in Bayelsa state at Okpoama Community, which is the Honourable Minister Of Petroleum state home town under Brass Local Government Area of Bayelsa state, which of course will employ over 5,000 youths in the creeks of Niger Delta region”

“We are also aware of the major critical role the GMD NNPC Engr Mele K Kyari played so far that led to the approval and the groundbreaking of the train 7 NLNG Bonny project that amounted over 10, billion dollars that will create direct job employment of Bonny and Niger Delta youths of over 12, 000 from Bayelsa and Rivers State precisely , this too was equally initiated and made possible by the GMD NNPC Engr Mele Kyari himself, and by the special grace of God, the approval and construction of OLOIBRI MUSEUM AND RESEARCH CENTER, in Ogbia Local Govt Area of Bayelsa state was also initiated and given approval due to the full weight put together by the GMD NNPC Engr Mele Kyari in collaboration with the Nigerian content Development And Monitoring Board headed by the Executive Secretary Engr Simbi Wabote.”

“This is one very significant project that is so dear to the people of Bayelsa state and Niger Deltans at large due to the fact that OLOIBRI was the first place crude oil was first discovered in large commercial quantity in 1958 and since then, the Community was abandoned and rejected by previous Administrations and previous GMD’s of NNPC for over 64 years without given any attention but as we speak, this laudable project was made possible by the magnanimity of the GMD NNPC who has passion for the Development of the Niger Delta region.

“Therefore, to this end, the Leadership of Niger Delta APC YOUTH VANGUARD,led by GEN FIAWEI PATHFINDER, who is the convener, With The Niger Delta Advocate For Peace And Good Governance Group, led by GEN KOROYE ADOKEME, And the Coalition of Ex Militants Support Group For President Muhammadu Buhari ably led by GEN JERRY, AKA KING OF THE BOYS and others unanimously pass a vote of confidence on the superlative Leadership qualities exhibited by the GMD NNPC Engr Mele Kyari in the last two years.

He has transformed and repositioned the NNPC OPERATIONS to a profit-making Organization with 287. 7 Billion Naira profit margin recorded so far in the year 2020 audit report for the first time in the history of the establishment of the NNPC for over 40 years in existence, this has placed the nation oil sector to an enviable height in accordance with global best practices.