The National Bureau of Statistics (NBS), says Nigeria’s headline inflation rate increased to 19.64 per cent on a year-on-year...
Read more 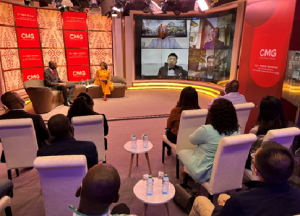 China Media Group (CMG) has set up a new collaboration platform with Africa. The “Our African Partners: CMG Media Cooperation Forum 2021” brings together under one umbrella CMG and African media.

The event culminated with the issuance by 36 partners of a joint declaration outlining the principles and aspirations of the forum, which include acting as responsible public information disseminators, strengthening and deepening cooperation, and amplifying Chinese and African voices on the global stage.

In his opening address, Huang Kunming, head of the Publicity Department of the CPC Central Committee, urged Chinese and African media to remain objective and impartial, and stand for justice. Both sides in the partnership will continue to treat each other sincerely and enhance people-to-people connection, he assured. Huang emphasized expanding digital benefits through innovation under the partnership.

Commenting on China-Africa media cooperation amid unprecedented changes in the world, Gregoire Ndjaka, CEO of African Union of Broadcasting, said “it testifies the common desire to appreciate the efforts made in this vast project” and presents the opportunity to start over on a more solid basis.

Media representatives, policy makers, media and communication scholars from China and more than 40 African countries attended the event which was held both online and offline in Nairobi. CMG president Shen Haixiong and several other chief executives of African state broadcasters were present.

“From the ancient Maritime Silk Road to the Belt and Road Initiative today, China and Africa have been going in the same direction,” Mr. Shen observed in his remarks.

“China, we know, is a world leader in the space of online media and online technology. China has played a very important role in showing how technological advancement can work to the benefit of its people,” Survé said, adding: “We in Africa are hungry to emulate that particular example of China and to see how we can use technology in order to bring about better news flow and meet the aspirations of the African people.”

Mallam Yakubu Ibn Mohammed, the Director General of Nigerian Television Authority proposed the setting up of a central video server maintained and funded in partnership for better information and content sharing.

“Chinese and African media should seize the opportunities of a time of change and tap into potential for cooperation in areas including exchange of content, exchange of staff, and co-production,” Dr Ayub Rioba, the Director General of Tanzania Broadcasting Corporation, said.

In their speeches, Senegalese Minister of Culture and Communication, Abdoulaye Diop; Ambassador Erastus Mwencha, the former Deputy Chairperson of the African Union Commission and Amin Alhassan, the Director General of Ghana Broadcasting Corporation
were optimistic the forum will deepen collaboration between CMG and African media on the one hand and, relations between China and Africa on the other.

“One lesson that we witnessed in the wake of the COVID-19 pandemic is the lack of policy coordination, production and distribution of vaccines and vaccine nationalism. I salute the media for highlighting this serious lacuna. This should be extended to all other areas of human endeavor and must be based on facts and figures,” Mwencha observed.

In the panel discussion, Prof. Peter Kagwanja, the President and Chief Executive of Africa Policy Institute; Dr. David Monyae, the Director of Center for Africa-China Studies at the University of Johannesburg; Dr. Ayub Rioba, the Managing Director of Tanzania Broadcasting Corporation; as well as media experts from China tackled the challenges of imbalance in global information flow, climate change, and a rigged global trading system.