The Chairman, Independent National Electoral Commission (INEC), Prof. Mahmood Yakubu, has expressed satisfaction with the level of preparations by local government offices in Ondo state for the state governorship election. 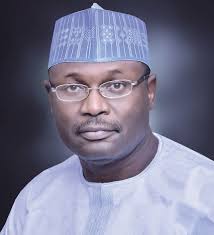 Yakubu expressed the satisfaction while speaking with newsmen after his assessment tour to the Akure South Local Government office of the commission on Friday.
He said that the choice of Akure South local government office for assessment visit was deliberate.
Yakubu said that the choice was not only because it was located in the capital city, but because it had the largest registered voters and number of Permanent Voter Cards (PVCs) collected.
“The purpose of the visit as I keep saying is for us to assess a practical level of readiness of our local government offices.
“The Electoral Officer of the LG briefing the visiting team has confirmed that they received all the non sensitive materials, and organised them in packs by registration areas and polling units.
“We are satisfied so far by the arrangement. This visit has been very fruitful. Indeed what we intend to do is to make Ondo state better than Edo state.
“The best way to ensure that this is achieved is by undertaking this visit to see practically what we have on ground and we are satisfied with what we have seen so far,” he said.
He said that the commission had always ensured the inclusion of persons living with disabilities in the electoral process by introducing magnifying glasses for visually impaired persons, posters for the deaf and braille guide for the blind.
“On election day it has always been the tradition of the commission to accord preference to persons with disabilities, pregnant, nursing mothers and the elderly at the polling units.
“When they come they should not join the queue, they should just go to the head of the queue and vote and thereafter go home,” he said.
Also Speaking, Yakubu warned the local government not to delay opening of poll on election day.
“INEC state headquarter is here in Akure South. The Headquarter of police is hear in Akure South and you have no riverine areas. So you have no reason not to deploy open polling units,” he said.
Speaking earlier, the INEC Electoral Officer for Akure South, Mr Othuke Egwuterai, said all the non-sensitive materials for the LGA’s had been received and arranged into the different RAs and Polling units.
“Similarly, the Registeration of voters has also been batched according to the voting points,” he said.
Egwuterai added that the security arrangement for LG had been strategically mapped out and the transportation arrangement perfected with the National Union of Road Transport Workers.
He assured the Chairman and the Commission that the staff of the Local government would work very hard to make the success recorded in Edo State gubernatorial election a child’s play to that of Ondo.
“We will do better than Edo State. We are ready to conduct a free, fair, acceptable, credible, conclusive and successful gubernatorial election in the Sunshine State of Ondo, come, Oct. 10,” Egwuterai said.(NAN)