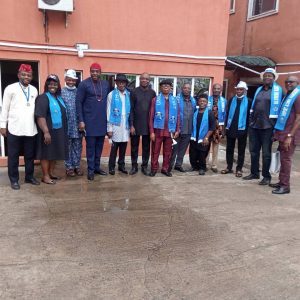 … He offered a stable leadership and required balance… Ag. President

With encomium from local and international dignitaries including the Bayelsa State Governor, Senator Douye Diri, the University of Port Harcourt Alumini laid to rest its National President Chief Christopher Adokeme in Bayelsa state.

The burial activities started with a Service of songs at the Dr. Gabriel Okara Cultural Centre, Yenagoa, last week with a candle light procession and the interment held at his home town in Isampou, Ekeremor Local Government Area of Bayelsa and the Thanksgiving Service also held in Yenagoa the Bayelsa State capital

The state Governor Senator Douye Diri, who showered encomium on Late Adokeme described the late national President as a man of many parts that impacted positively on various facets of life.

Speaking at the service of songs, Diri noted that Adokeme left when he was most needed.

“Chris was a man of many parts. He was a journalist, entrepreneur and sports administrator. He was also a traditionalist who was a High Chief in his community

“Chris impacted not only on his family but also on Bayelsa State and Nigeria as a whole. He died when his services were needed most.”

The governor, who is also an alumnus of the University of Port Harcourt, noted that Chief Adokeme was a goal-getter that stopped at nothing to achieve what he wanted.

In a tribute by UNIPORT Alumni Association delivered by the Acting President Mr. Uduak Ewitat and National Secretary General, Pastor Ule Williams Glad, expressed gratitude to the governor, the entire Uniport Family and everyone that created time to honour its late president noting that it is a service that will not be forgotten quickly.

Ewitat stated that the National Executive Council, NEC is indeed pained at the sad event of the death of its President Adokeme who will be remembered for his humble disposition.

He explained that although it will take the UNIPORT Alumni and family some time to recover from the loss, he therefore urged all to emulate the attribute of its late president who would be remembered for as a jolly good fellow, a quintessential gentleman, friend and father to many.

‘‘He was a leader, extra-ordinary and best described as a good man. A man mountain that naturally from a distance ought to be feared but rather has an attractive ambience from within that radiates exciting convivial beams, that is always his personae.

‘‘He offered a stable leadership and required balance for an all-important association like the University of Port Harcourt Alumni’’ the tribute stated.

It however appealed to the family and his wife Justice Mrs Doris Adokeme to stay strong and be encouraged in the lord.

‘‘We are all together with you in this loss’’.

However, The Acting National Alumni President urged Isampou community and the entire Ekeremor LGA as well as Bayelsa State to take heart and be comforted that he had gone to rest.

While we pray that God will grant the deceased eternal peace, we ask that you assuage yourselves in the words of Late Rev. Dr Martin Luther King jr. that says; the utmost test of a man is not in times of merriments but in times of adversities like this. And like king David may we all be strong and be encouraged in the Lord.