Former Chairman, Senate Committee on Banking, Insurance and other Financial Institutions, Dr. Rafiu Adebayo Ibrahim, has urged the federal government and regulatory agency on monetary policy to put politics aside and allow the 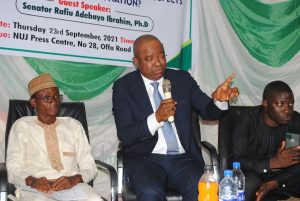 economics to rule and reign on the issue of naira exchange rate, adding that they should allow the market forces to determine naira’s fair value both at the time of boom and otherwise.

Senator Ibrahim, who spoke in Ilorin at the 30th edition of Media Parliament of the Kwara State Council of Nigeria Union of Journalists (NUJ), explained that politicisation of the exchange rate only empowers the political class to do more harm to the nation’s economy.

In his paper titled: “Naira Devaluation by Central Bank of Nigeria: How Did We Get Here? What Are The Challenges and Prospective For Us As Nation?”, the former legislator opined that Nigeria being a monolithic economy was enough reason for it to be financially disciplined and futuristic in its savings and investment policies.

The former senator advocated promotion of local production and industrialisation, particularly of products that are highly in demand, adding that the time was ripe to diversify the economy under a truly long-term strategic plan that would turn around the fortunes of the nation away from being mono-product.

He also called on the government to address the seemingly intractable insecurity which has adversely the economic life of the nation, warning that its devastating effects, if unattended, would worsen the value of the nation’s currency.

“It is important to state that the politicisation of the exchange rate of the naira is an unhealthy obsession in Nigeria. It only gives politicians an incentive to wage war against reality by doing things that are economically harmful.

“Attempts made in the past to embrace liberalization is a step in the right direction, but should have been also backed with some high level of financial discipline that would provide savings for a rainy day. The very act of trying to fiddle with the currency whenever we run into trouble is what really needs to be re-examined.

“Knowing that we are a monolithic economy is enough reason for us to be futuristic in our savings and investment policies. The moment oil prices crash, businesses and transactions that were perfectly legal suddenly become ‘unpatriotic’ and everybody becomes an expert in economics with pressure of the policy makers who are in most cases obviously ill-prepared, policy-wise for such situations.

“It is only in Nigeria that you see a situation where we pray and hope for high oil prices to sustain our spending pattern without saving, while we want to keep the exchange rate ‘stable’ even when revenues have collapsed dramatically.

In his remarks, the Chairman, Kwara State Council of NUJ, Abdullateef ‘Lanre Ahmed, said the volatility of the exchange rate was baffling, hence the urgent need to address it, especially its adverse effects on the local economy.

Ahmed traced the problem to the summersault of the Central Bank of Nigeria on the nation’s monetary policy, which has consistently weakened naira in the global economy and in turn affected the purchasing power of the masses.

“At the moment, the exchange rate of naira for one dollar in the black market is over N550, and getting forex at the designated commercial banks is a herculean task. This is just as the CBN continues to act in a manner that suggests that our naira would further experience devaluation.

“And out of curiosity, you begin to wonder whether the monetary policy of the apex bank is congruous with the reality beyond policy documents that are often bandied around to divert attention.

“There is no doubt to posit that Nigeria’s economy is haemorrhaging. No thanks to the policy summersault of the CBN on monetary policy that has, in significant way, weakened naira in the global economy and in turn reducing the purchasing power of the populace. And you are attempted to ask this nagging question. In whose interest is CBN formulating its policies?

“Similarly, the penchant of the federal government for external borrowing is now at an alarming proportion, thus accentuating claims and counter claims on the desirability or otherwise of the government’s step”, Ahmed said.