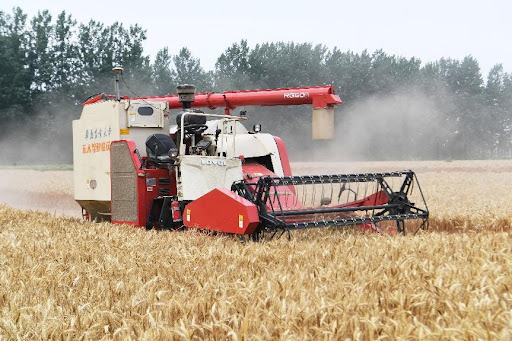 In Fuyu county, Qiqihar City, northeast China’s Heilongjiang province, an unmanned tractor was leveling a cornfield that covers an area of about 53 hectares.

In Zhaoxian county, north China’s Hebei province, two intelligent tractors with a 120 horsepower engine and unmanned agricultural machinery for harvesting and transportation, all equipped with BeiDou Navigation Satellite System (BDS), worked in coordination with each other in a field after technicians set routes and gave instructions to them. Within 10 minutes, a furrow of cabbages was harvested.

In Henghe township, Cixi City, east China’s Zhejiang province, a self-driving transplanter worked automatically in a field. It is able to turn around and avoid obstacles on its own, ensuring continuity and stability of its operation.

Unmanned operating systems represent the most popular application of AI in agriculture. They can adapt to dozens of types of farm tools and enable agricultural machines to carry out tasks automatically in an accurate manner day and night.

With the BDS, technicians can ensure that self-driving agricultural machinery performs operations along a pre-set route. The positioning accuracy of the system can reach 2.5 centimeters.

Unmanned operating systems are not only efficient, safe, and suitable for fine management, but are easy to operate.

Intelligent agricultural machinery operators only need to adjust settings of the machinery according to field conditions and then control machines remotely via their mobile phones, allowing self-driving machines, including tractors, to work automatically even for dozens of hours in a row, said a farmer surnamed Han, who is a member of the agricultural cooperative of Fuyu county.

Researchers of AIForce Tech estimated that unmanned operating systems had improved the overall efficiency of agricultural operations by 30 percent.

According to Li, the country will further enhance the R&D of agricultural robots, expand the application scenarios of AI in agriculture, explore unmanned farms, and materialize the overall solution of intelligent farms.

By He Qin, People’s Daily

By Zhang Jian The Russia-Ukraine conflict has broken the peace of Europe, which is a pernicious consequence of the containment strategy implemented by the U.S....
Read more

By Gao Qiao The COVID-19 pandemic continues to constitute a public health emergency of international concern, said the World Health Organization (WHO) in a recent...
Read more

"You have completed the order and received full payment," said a transaction notification received by Li Chaohua, a man that runs a trade company in...
Read more