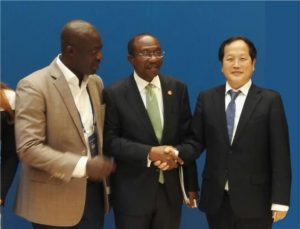 As 2023 draws nigh, candidates who intend to replace President Muhammadu Buhari at the Aso Rock Villa, are already making their declarations. But of course, among the many, there are standouts.

From Benue State, North Central Nigeria, Moses Chiahemba Ayom is up for the job. The 53-year-old member of the ruling All Progressives Congress (APC), is a renowned businessman with interests and investments in real estate, hospitality, mining, construction, and interior systems.

Aside his pedigree, his ambition is also married to the Middle Belt region’s quest to produce the country’s next President.

For Ayom, he is not new to developmental strides. He is the MD/CEO of Granite and Marble, an indigenous mining company that has been making Nigeria proud. Ayom has been part of the Buhari success story of development. In his drive to develop Nigeria, he was recently on a delegation with President Buhari on a working visit to China along with other Nigerian entrepreneurs, including Aliko Dangote, where he signed an agreement to establish the biggest granite corporation in Nigeria.

Having excelled in the private sector, Ayom’s capacity is also being benefited from by the Federal Housing Authority (FHA), where he is currently in a joint venture project alongside China for the establishment of the first Green City which is geared at promoting Climate Change among other benefits. 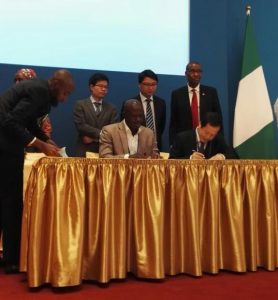 Unlike some other aspirants, the business mogul and technocrat so far has no record of corruption against him. Ayom has also developed a robust relationship with Buhari. Having been groomed by the current President through his many travels with him where he has meticulously understudied the President’s policies, one can undoubtedly say that he is the man for the job, come 2023.

Ayom looks set to secure and advance the developmental drive of the current administration beyond 2023 from the angle of expediency and also of fairness and justice, and take Nigeria to the next level of prosperity and peace.

Thankfully, his antecedents have not gone unnoticed. Sequel to his declaration to run, endorsements have been pouring in. One of such was the one he got from the Paramount ruler of Tiv kingdom, HRM (Prof.) James Ayatse, who personally anointed him for the 2023 task and gave him his royal blessings. Ayom has also been given a nod by the Council of Imams and Bishops in his region. Similarly, he has also gotten approval from a delegation of South-East and South-South leaders, including those from Rivers and Delta states.

Ayom, who declared to run on January 1, 2022, also qualifies by age, especially now that Nigeria and Nigerians are looking away from recycling old and rusty politicians. He is a youthful, industrious and de-tribalized Nigerian, who has proven his mettle in business and nation building.

It would be recalled that his trip with Buhari to China, alongside other key industrialists, initiated a landmark partnership between his company, Granite and Marble Limited, and SBM China Limited with a massive potential to transform Nigeria’s mining sector.

According to Ayom, he is on a rescue mission to build a united, secured and prosperous Nigeria which will be anchored on security, economy, agriculture, education, health, power, transport, industrialisation among others.

As a business tycoon who has traversed the length and breadth of the globe, Ayom has affirmed that if given a chance, he will, as a businessman, encourage the production and consumption of home-made goods.

Thus, in his letter of intent to Buhari letter titled: ‘Indication of Interest to run for the Office of President in 2023’, Ayom said: “We would consolidate on your good work to break the jinx of epileptic supply in Nigeria. We are well aware of ongoing initiatives, partnerships, and projects that your administration is executing to ensure that Nigeria achieves the 24,380 MW power supply and will make their completion a key part of our agenda. This is because we believe, as you do, that doing so would help reverse the annual economic losses attributable to inadequate power supply, which the World Bank estimates at $26.2 Billion (₦10.1 trillion).

“With great humility and deference to your good self, I, Moses Chiahemba Ayom, member of the All Progressives Congress (APC) wish to formally notify you of my interest in seeking for the Office of the President of the Federal Republic of Nigeria in the 2023 election under the platform of our great Party the APC

“My decision to join the race is premised on your Excellent performance and the very solid trajectory of development your policies have placed Nigeria on. Your deft handling of the economy and the near miraculous infrastructure revolution we have witnessed require a firm believer in this course and a proven partner to be sustained.”

Elucidating on his specific plans and strategies to boost the economy, Ayom said: “We plan to leverage your successes to build a vibrant economy that helps Nigerians and businesses to realize their potentials. An economy that that would expand markets and unlock sustainable growth, while creating an enabling environment in which people, communities and businesses can thrive.

“We would build a modern and sustainable economy that leverages advances in ICT and Tech-Innovation. An economy that creates jobs, encourages industrialization, increases tax revenues, improves quality of life, and ensures inclusive growth.”

Speaking during their endorsement of his candidature, spokesperson for the bishops, Archbishop Edward Chanomi, said “We the entire Middle Belt Bishops endorse our very own Chief Moses Ayom as a credible aspirant for the forthcoming Presidential elections coming up in 2023.”

“We are glad with the massive endorsements across board, especially from our counterparts on the Muslim divide where they called on President Muhammadu Buhari and other Muslim aspirants to support the Moses Ayom project in the spirit of fairness and equity. We cannot thank them enough for advancing the Nigerian spirit of unity, peace and progress.

“Also, considering the fact that the Middle belt is yet to produce someone in the capacity of the President or even the Vice President, we deem it fit to endorse such a candidate in the person of Moses Ayom, whom we are very confident of his reliability and capability in running for the office of the President of the Federal Republic of Nigeria,” the clerics added.

Atavti, is the Judiciary Editor of Nigerian pilot Newspaper in Abuja.

Nigeria’s DSS Boss And His Well-Deserved Medal Of Honor

By Kenneth Atavti While a section of Nigerians queried President Muhammadu Buhari's 437-or-so-man list of recipients for National Honours, almost no one muttered against the...
Read more

A Magistrates’ Court in Ilorin on Friday, ordered that two men be remanded in a correctional centre for allegedly procuring an abortion for...
Read more
- Advertisement -