The Peoples Democratic Party (PDP) has congratulated the President of African Development Bank (AfDB), Dr Akinwumi Adesina, for his re-election to serve a second term in the regional bank. 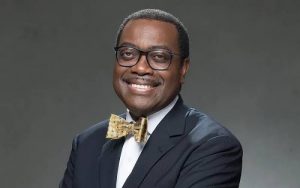 The party gave the congratulatory message in a statement issued by its National Publicity Secretary, Mr Kola Ologbondiyan, in Abuja on Thursday.
Ologbondiyan said the re-election of Adesina, a former Minister Of Agriculture, was not only earned but well-deserved.
Ologbondiyan said it was deserved in view of the competence and commitment Adesina had displayed in uplifting and promoting the bank’s operations since 2015, when he was first elected as its president.
He said, ”Adesina has attracted praises in bringing his deep knowledge in economic development to bear on the bank’s primary functions of making loans and equity investments for the socio-economic advancement of Regional Member Countries (RMC).
“The PDP commends Adesina for improving on the the bank’s key role of providing technical assistance for development projects and programs as well as promoting investment of public and private capital for development.”
Ologbondiyan noted that Adesina had remained a good ambassador of Nigeria in his display of high level of discipline, professionalism and utmost diligence in the discharge of his duties at the AfDB.
“The party particularly notes that Adesina’s high potentials were first brought to limelight when he was appointed by the PDP administration of President Goodluck Jonathan as minister of agriculture in 2010.
“The PDP notes with pride that potentials discovered by the inclusiveness of its administration have continued to bring honour to Nigeria both at the national and international arena,” he said.(NAN)