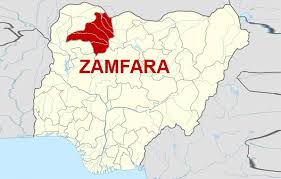 The Zamfara House of Assembly has suspended two of its members, Yusuf Muhammad (APC-Anka) and Ibrahim Tukur (APC-Bakura) for allegedly aiding banditry in the state.
This followed the adoption of a motion by Yusuf Kanoma (APC- Maru North) at Tuesday’s plenary in Gusau.
Speaking on the motion, Kanoma urged the house to suspend the lawmakers over allegations that they were collaborating with bandits in the state.
“One of them is suspected to have supplied information to bandits leading to the death of one of our lawmakers, Muhammad Ahmad, representing Shinkafi Constituency, who was killed on his way to Kano few months ago.
“The other was seen rejoicing after the kidnapp of our Speaker’s father, who died in bandits captivity,”he said.
Contributing, the Majority Leader, Alhaji Faruku Dosara, said that the allegations must be treated seriously and called for a thorough investigation by the House.
Dosara suggested that the House should mandate one of its committees to investigate the matter and report back.
Speaker Nasiru Magarya, thereafter, directed the House Committee on Ethics and Privileges to investigate the matter and report to the house in three months.
The News Agency of Nigeria(NAN) reports that during the plenary all the 24 lawmakers, the Clerk and Chairman of the Assembly Service Commission were made to swear to an oath that they had no connection with banditry in the state.
In another development, the House on Tuesday screened and confirmed Sole Administrators for the 14 local government councils of the state as requested by the State Government.
Some of those confirmed included Aminu Yarkofoji (Bakura), Kabiru Maigoro( Bini Magaji), Basiru Mu’awiyya (Bukkuyum), Muhammad Maiturare (Bungudu), Abubakar Dakitakwas (Gummi) and Sanusi Sarki (Gusau).(

The newly elected local government Chairmen and Secretaries of the Kwara state chapter of the All Progressives Congress (APC) across the 16 local government...
Read more

The Chairman of the Committee for the state congress of the All Progressives Congress (APC) in Kwara State, Prof. Emmanuel Dan-Daura has admonished all...
Read more

The Peoples Democratic Party (PDP) has approved a further extension of closing date for the sale of nomination forms for the Ekiti state...
Read more

The Peoples Democratic Party (PDP) says the passage of direct primary for the nomination of candidates for elections in political parties by the...
Read more
- Advertisement -