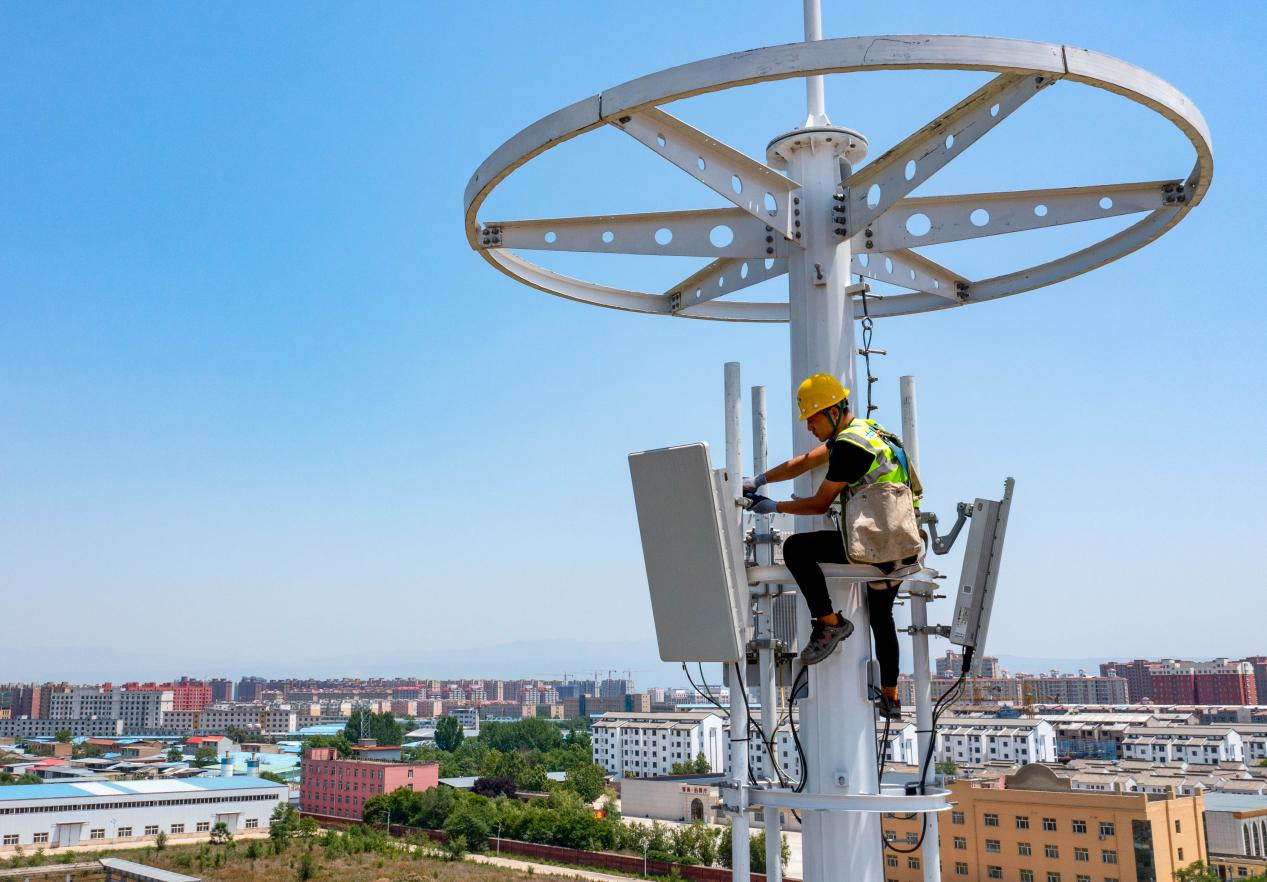 By Wang Zheng, People’s Daily
China has built nearly 1.97 million 5G base stations and reached 475 million 5G mobile users by the end of this July, said the country’s Ministry of Industry and Information Technology (MIIT), constituting the world’s largest 5G network.
The 5G base stations currently in operation in China account for over 60 percent of the world’s total three years after the issuance of 5G commercial licenses, and the country’s 5G users make up more than 70 percent of global 5G users.
The construction of 600,000 5G base stations will be completed this year, the MIIT said.
China’s 5G commercial license has been officially issued for three years, with record-breaking base stations scale and constant breakthroughs in key technologies. The 5G development in China not only promotes leapfrog growth of the information and communication industry, but also injects a strong impetus to the digitalization of the economy and society.
“The 5G connection was poor on the ship when I came here last year, but this time I’m always connected,” said a man surnamed Yang taking his family to the Putuo Mountain, one of the four famous Buddhist mountains in China located in east China’s Zhejiang province.
On the ship to the mountain, Yang could even watch sports games in high definition on his mobile phone.
The improved network experience was attributed to a 5G base station built on an uninhabited island in Zhoushan, Zhejiang province.
Following coordinated plans and taking a moderately proactive approach to advancing infrastructure investment, Chinese telecommunication carriers have constantly expanded the number of 5G base stations.
According to statistics, by 2021, all cities above the prefecture level across China have been covered by the 5G network, while the 5G signal has been available in over 98 percent of county seats and 80 percent of townships.
China Unicom and China Telecom, two major carriers in China, jointly built the world’s first co-shared 5G SA network, which has now achieved coverage in urban areas, counties and key townships
China Mobile, another major carrier in the country, has built over 200,000 base stations in rural areas in cooperation with China Broadnet, a new telecommunication carrier.
The co-construction and sharing have not only speeded up the building of the 5G network, but also tremendously saved capital and resources, contributing to the green and low-carbon operation of enterprises.
It is reported that the co-construction of 4G and 5G networks by China Unicom and China Telecom alone has saved over 210 billion yuan ($30.65 billion) of investment in the past two years. It is expected save over 20 billion yuan in operation costs, 10 billion kilowatt-hours of electricity consumption and 6 million tons of carbon emission annually.
Apart from the accelerating network construction and sharing, China has made breakthroughs in technological innovation in key 5G technologies. It has constantly narrowed the gap with global industry leaders in terms of 5G chips, mobile operating systems and other core technologies.
For instance, China Mobile has led 156 international 5G international standard projects and applied for over 3,600 5G patents, which makes it one of the leading carriers around the globe.
While making constant progress in 5G technologies, China has also strengthened its 5G industry. In 2021, the country shipped 266 million 5G phones, up 63.5 percent year on year. As of April this year, there were 1,334 models of 5G devices in the world, including 677 mobile devices. Over 80 percent, or 558 of these mobile devices came from China.
The 5G technology, with large bandwidth, low latency, wide connectivity and other features, is being merged with technologies such as high-definition videos, augmented reality, virtual reality and artificial intelligence, to create massive application scenarios in the audio and video sectors.
An MIIT official said China will further encourage innovation and solidify the industrial foundation to promote application innovation, technological breakthroughs and ecological construction in the field of 5G.