An FCT High Court on Tuesday ordered that two businessmen appear unfailing on June 27 for arraignment.
The Attorney-General’s Office filed a seven-count charge of bordering on issuance of dud cheque and cheating against Ishola Sunday and Emmanuel Olamijulo,

Also charged alongside Sunday and Olamijulo is Ronke, the first suspect’s wife.
The prosecution counsel, John Okpa told the court that the suspects had been served with the charge and applied for an arrest warrant to be issued against them.

Justice Kezziah Ogbonnaya in exercising her discretion, adjourned the matter until June 27 for arraignment and ordered Ronke to inform her husband to appear in court.
” Failure for the two suspects to appear on the said date would result in me issuing a bench warrant against them, ” Ogbonnaya said.

Ronke had earlier told the court that her husband, was not served and travelled to the village for a burial.
The News Agency of Nigeria (NAN) reports that the police alleged that Ronke issued a N500, 000 Fidelity bank dud cheque from her company, Ronak Communication in favour of LAPO Microfinance Bank, Kubwa, on Sept.6.

The prosecution counsel alleged that the cheque was dishonoured at the bank upon presentation adding that Ishola refused to pay a N3, 237,615 loan received from the Microfinance bank. 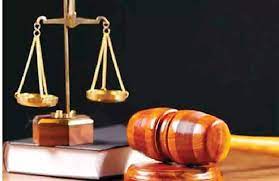 He said the suspects were arrested following a tip-off by the Nigerian Police.
He said Ronke’s husband and Olamijulo also issued dud cheques of N500,000 to the Microfinance bank.
The offence, he said, contravenes the provisions Section 311 and punishable under Section 312, 322 and 136 of the Penal Code and 1(1)(b)(i) of the Dishonoured Cheques Offence.

Three staff members of AIICO Capital Ltd were on Thursday arraigned before an Ikeja Special Offences Court by the Economic and Financial...
Read more

As reactions continue to trail the rearrest of the leader of the proscribed Indigenous People of Biafra (IPOB), the Igbo Peace Forum...
Read more
- Advertisement -