The Nigeria Centre for Disease Control (NCDC) has revealed that 1,103 persons have died from Coronavirus (COVID-19), in the country. 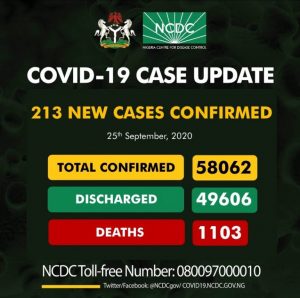 The NCDC made this known on its official twitter handle on Friday.

The News Agency of Nigeria(NAN), reports that there was an increase of 88 cases from the 125 reported on Sept. 24 .

According to the agency, 213 new infection were confirmed around the country, bringing the total number of confirmed cases to 58,062.

The health agency sadly reported two new deaths which raised the overall death toll in the country to 1,103.

It stated that 508 COVID-19 patients have been treated and recovered from the infection.

The NCDC said that it erroneously reported one death in Bayelsa on Sept. 23, 2020.

The health agency added that the cumulative discharged cases included 364 recovered patients in Katsina State who were managed in the community.

The agency added that the new infection were reported from 17 states of the federation.

According to it, Lagos and Plateau States recorded most of the new cases with 51 each followed by FCT with 29 new cases.

The NCDC said that the country had now recorded, in total, 58,062 new cases of the novel coronavirus, with 49,606 cases discharged and 1,103 deaths reported across the 36 states and the Federal Capital Territory.

It said that a multi-sectoral national emergency operations centre (EOC), activated at Level 3, have continued to coordinate the national response activities across the country.(NAN)

By Our correspondent Every 1st of December is set aside to mark the World AIDS Day. It is a day to remember those who died...
Read more

By Our Reporter Media practitioners in the South-South region have been urged to continue to give visibility to HIV/AIDS in their reportage particularly as there...
Read more

The Bayelsa State Agency for the Control of AIDS, BYSACA has received an award in recognition of its outstanding performance to institutional systems strengthening...
Read more