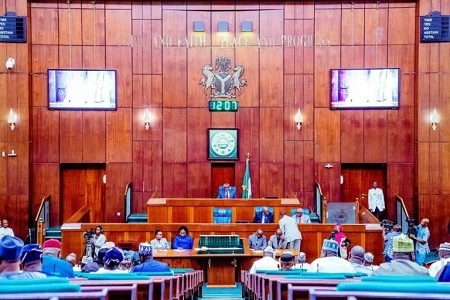 The House of Representatives have summoned the Presidential Task Force (PTF), on COVID-19 to appear and brief it on May 5 on the federal government’s response to the COVID-19 Pandemic and its template for the intervention in all the states of the federation.

Also to appear before the House were Director-General, National Centre for Disease Control (NCDC) and Minister of Health.

This was sequel to the unanimous adoption of a motion of Matter of Urgent Public Importance by Rep. Ado Doguwa (APC-Kano) at the plenary on Tuesday.

Moving the motion earlier, Doguwa recalled that index COVID-19 case was reported on Feb. 27, 2020 in Nigeria and that the country had so far recorded 1,337 confirmed cases of the virus, 40 deaths and 255 recoveries.

Doguwa said that the Federal Government had released N5 billion to NCDC to scale up capacity and strategise rapid response to the pandemic.

The Lawmaker expressed worry over the rising spate of unexplained deaths in Kano State in recent weeks, where 77 COVID-19 confirmed cases had been recorded.

According to him, Kano State being the most populated state of the federation, according to the National Population Commission has only one testing centre.

The lawmaker said that the centre had been shut down for about a week now, reportedly due to lack of some testing materials and reagents.

He expressed concern that Nigeria had so far tested 10,918 of its estimated 200 million population whereas Ghana, South Africa and Egypt with much lower population had tested 168,643, 100,622, and 90,000 of their people respectively.

Doguwa said that Nigeria currently has a capacity for 3,000 tests in a day whereas South Africa has nearly 10,000 tests capacity per day.

He said that Nigeria has only 15 testing centers one each in Kano, Sokoto, Borno, Kaduna, Plateau, Oyo, Osun, Edo, and Ebonyi State, two in the FCT and three in Lagos state.

“Conscious of the fact that whereas sample collection and transportation remain in a critical challenge in Nigeria’s fight against COVID-19.

“According to NCDC, Ghana has since engaged the services of drone technology in the delivery of samples to help save lives more quickly and drones also have the capacity to deliver test kits and personal protection equipment.

“Convinced of the urgent need to arrest the rising cases of unexplained deaths in Kano state and also scale up national response to the Coronavirus pandemic, including the establishment of at least one testing centre in every state of the Federation to save the nation from the grave scenario being witnessed in Kano State.

“Summon the DG NCDC, Honourable Minister of Health, and the Chairman of the Presidential Task force to appear before the House at plenary on Tuesday, May 5, 2020 to brief it on government’s response to the COVID-19 Pandemic and its template for the intervention in all the states of the Federation,’’ he said.

The House urged the Federal Government to as a matter of urgency and priority scale up the nation’s COVID-19 testing capacity.

The green chamber called for the establishment of a testing centre in each Local Government Area of the Federation.

The lower chamber also recommended the inclusion of religious and traditional leaders in creating awareness in local communities.

In his ruling, the Speaker of the House, Rep. Femi Gbejabiamila approved an investigation into the immediate and remote causes of the unexplained huge number of deaths in Kano State.