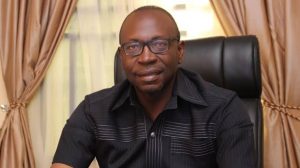 The governorship candidate of the All Progressives Congress in Edo State, Pastor Osagie Ize-Iyamu, has said that the current administration of Governor Obaseki receives over N600m monthly as security vote, but gives the police a paltry N5m.

This, he revealed during a live broadcast on his Facebook page on Monday, marking the commencement of an announced weekly online engagement which, according to his Campaign Organization, is part of the party’s adaptations to directly converse with the people on safe platforms in line with health regulations and INEC’s guidelines.

Responding to a question about how he would tackle security challenges in the state if elected, the governor pledged to dedicate more resources to combatting insecurity and queried the present administration’s sincerity to securing lives and property.

“The present government has not been able to show any serious commitment to the security funding of the state. Every month, the governor collects over N600 million as security vote and gives the police N5 million. That does not show commitment to security. N5m is not even enough to fuel vehicles”, he said.

Ize-Iyamu further expressed concerns about how Edo seems to be the only state in the South-South that has not made adequate investments in technology which can be used to combat crime.

“In this age, what is our investment in technology? Edo state might be the only state in the South-South that does not have trackers that can be used to trace kidnappers. The government must show sincerity in combating crime.”

Speaking on the abandoned Water Storm Project, Ize-Iyamu stated his commitment to ensuring its completion. He also expressed surprise that Obaseki, whose company, Afri Invest, got a large commission from the project, chose to not complete it when he became governor.

“The water storm project cannot be abandoned. I didn’t initiate it, but we must commend those who planned it. Even four years ago when I was contesting, I commended the foresight because flooding is a major challenge in Benin.”

“To abandon the project the way it has been abandoned is imprudent and wicked, especially coming from a governor that was part of its conception. Afri Invest was involved in the financing of the water storm project and got a huge commission form it. How do you rationalize a governor who was part of that process to now decide that he is not interested in the project?”

The water storm project is a project that must be completed”, he said. “We will appraise it and do it at a reasonable cost.”

He also indicated his commitment to developing agriculture in Edo state, saying that his vision is to ensure Edo produces food for the rest of Nigeria during his first term in office.

Other issues he spoke on during the course of the engagement include teachers’ welfare and healthcare delivery, among others.

As part of measures to curtail sea piracy, kidnappings and other criminal activities, the Bayelsa government has imposed a dusk-to-dawn curfew on its waterways. Gov....
Read more