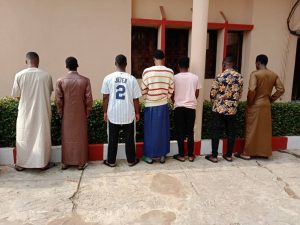 Operatives of the Ilorin Zonal Command of the Economic and Financial Crimes Commission (EFCC) have arrested seven persons suspected to be internet fraudsters at a hotel close to a popular mall in Ilorin, the Kwara State Capital.

Preliminary investigations, according to the EFCC, revealed that the two clerics were hired and lodged in the said hotel to offer spiritual help to some of the arrested suspects.

The suspects, who were said to have volunteered useful information to the investigators, would be charged to court upon the conclusion of the ongoing investigations.

Meanwhile, the EFCC has again enjoined the youths to make hard work their watchword and shun all forms of vices, adding that “this has always been the thrust of Abdulrasheed Bawa, Chairman of the EFCC’s message to the youths in the country.

His words: “Yahoo-Yahoo is not a sustainable way of life. The fact that the rate of unemployment is high should not be an excuse to resort to crimes. Acts of criminality may deliver wealth in the short term, but ultimately there will be misery and gnashing of teeth.”

The EFCC boss has consistently warned that the Commission would spare no efforts towards ensuring a corrupt-free Nigeria.