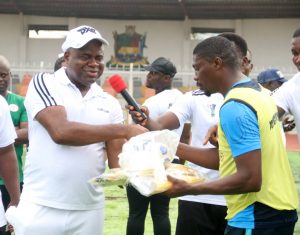 …….. Defending Champions Sqaures Up Against Medical University At Kick Off…..

Bayelsa State Governor, Senator Douye Diri, has praised youths for their massive involvement in sporting activities, and also winning laurels for the state, noting that sports remain a variable tool for engaging and shaping youths into having blissful careers.

The Governor stated this while flagging off the distribution of football jerseys to the 206 participating teams at the Bayelsa Governor’s Football Tournament, and also announcing cash reward for the state’s contingent at the just concluded first ever National Para Games, where the state came tops with 93 medals. 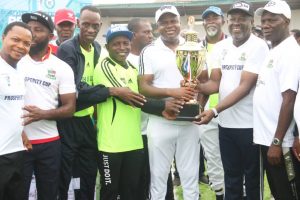 Senator Diri who was amazed with the number of registered teams for the tournament, otherwise known as “The Prosperity Cup”, urged the players to be focused on tourney, and not be caught in any form of misconduct or violence throughout the competition.

Also presented were sets of hosts and balls to all participating teams.

Earlier, the Commissioner for Youth and Sports Development, Hon. Daniel Igali, said the state currently has the largest grassroots football tournament in Nigeria, which was due to the revolution going on in the state.

He expressed the optimism that the current feat would be built upon to achieve better results.

“We currently have the largest grassroots football tournament in Nigeria. That attests to the revolution going on in Bayelsa State.

“Bayelsa is currently the home of sports in Nigeria. We have upstaged the bigger names. Hopefully, at the end of the year, we will show our true colours again,” Igali stated.

On his part, Director General, The Prosperity Cup, Mr. Ono Akpe, noted that the tournament has proven to be the country’s largest football competition, since it’s inception in 2015, and it’s gains are overwhelming. 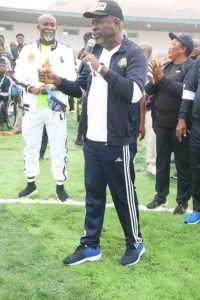 He added that twenty centres across the eight council areas have been carefully selected to host this year’s edition at the preliminary stage, urging the host communities to ensure a hitch free exercise, so as to enjoy the best of grassroot football.

The DG also described the registration of Ohaneze FC, Oduduwa FC Northern FC and Niger Delta FC in the Tournament as an interesting development that it would help foster unity and peaceful coexistence in the state.

“This development would go a long way to strengthen inter-community relations not only amongst the indigenes but also amongst the other tribes living in Bayelsa” he added.

The curtain Raiser of the tournament would see defending champions, Okolobiri community of Yenagoa, begin their quest of retaining the trophy when they face first timers, Bayelsa Medical University, at the Samson Siasia Sports Complex, on Monday, May 2nd.